Eating five servings of fruits and vegetables a day is not only healthy for the body, but it also improves psychological well-being, says a new study. The researchers found that the level of happiness increased for each extra portion and peaked at eight a day.

The study included moe than 12,000 people. The participants who included more fruits and vegetables in their diet experienced an increase in life satisfaction that felt by moving from unemployment and landing a job.

The study explored the psychological well-being beyond the other findings that fruit and vegetables can reduce the risk of cancer and heart disease.


‘Eating five servings of fruits and vegetables a day improved psychological well-being. The level of happiness increased for each extra serving.’

"However, well-being improvements from increased consumption of fruit and vegetables are closer to immediate."

The study followed 12,000 Australians who kept food diaries and had their psychological well-being measured. The findings showed large positive psychological benefits within two years of an improved diet.

Queensland's research fellow, Dr Redzo Mujcic, said, "Perhaps our results will be more effective than traditional messages in convincing people to have a healthy diet. There is a psychological payoff now from fruit and vegetables - not just a lower health risk decades later."

The study was published in the American Journal of Public Health. 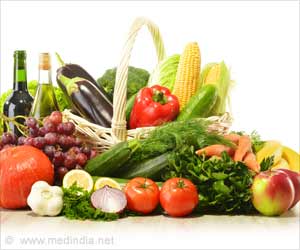 Eating More Fruits and Vegetables Helps to Reduce Risk of Depression
A moderate adherence to a healthy dietary patterns was associated with an important reduction in the risk of developing depression.
READ MORE

Antioxidants In Fruits and Vegetables Slows Down Aging and Boost Immune System
Antioxidants in fruits and vegetables prevents the aging of the thymus gland, which produces T lymphocytes that help the body fight infections.
READ MORE 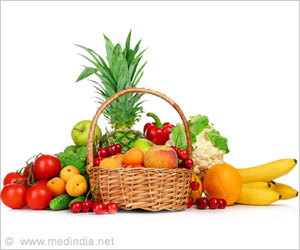 Declining Nutritional Values of Fruits and Vegetables
The produce we consume these days is lower in nutrients than those that were consumed a couple of decades ago. Today's produce isn't very healthful and it is only going to go downhill.
READ MORE

Mediterranean DietWhy Do We Eat - Nutrition FactsDiet Lifestyle and Heart DiseaseThe Acid-Alkaline balance, Diet and HealthAcid Base Dietary Balance and its Influence on Our Health and WellbeingNails - Health and DiseaseFruits to Help Lower Blood PressureCelebrating Life: Positivity and RejoicingHealth benefits of bananasFiber Up Your Meals