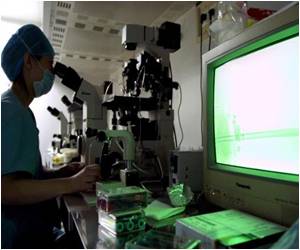 French scientists said that they have succeeded in creating the world's first lab-grown human sperm cells in what experts said could be a leap forward in tackling male sterility.

The Kallistem laboratory in the eastern French city of Lyon this week announced they had obtained "complete human spermatozoa in vitro", a world first which scientists have labored towards for some 15 years.

A fertilized mammalian egg releases from its surface billions of zinc atoms in zinc sparks, one wave after another, reveals a new study.
Advertisement

"At the end of 2014 the company was able to produce fully formed human spermatozoa in the laboratory setting, using patient testicular biopsies containing only immature germ cells, or spermatogonia," the company said in a statement. "This research paves the way for innovative therapies to preserve and restore male fertility, a major issue with global impact; numbers of spermatozoa have declined by 50% over the last fifty years."


The research has not yet been published in a peer-reviewed journal and experts greeted the news with caution, while admitting that if proven, the achievement was a significant breakthrough.

The WHO said Friday that Sperm can carry the Ebola virus for at least 82 days and urged men recovering from the disease to use condoms for three months after the onset of symptoms.
Advertisement
Spermatogenesis, the process through which the basic reproduction cells -- the germ cells -- develop into spermatozoa, is an extremely complex one.

According to Kallistem it takes 72 days inside the human body.

The researchers said the breakthrough could provide a solution to tens of thousands of men suffering from nonobstructive azoospermia -- or abnormal sperm production, rendering them infertile.

According to the company's estimates, the treatment of male infertility could provide a market worth over 2.3 billion Euros ($2.58 billion), with more than 50,000 new patients each year.

"From a testicular biopsy, it will be possible to obtain spermatozoa that will be cryopreserved until the man wishes to father a child," read their statement.

Previously, lab-created spermatogenesis had only been successful in mice.

"If it works, this procedure opens great prospects," Nathalie Rives, the manager of a fertility clinic told Le Figaro newspaper.

However she remained reserved, saying it was not excluded that adults suffering from a complete lack of sperm had "genetic anomalies which would also prevent in vitro spermatogenesis."

Professor Israel Nisand, co-founder of the European Bioethics Forum told Le Figaro that the procedure was preferable to reproductive cloning.

"If this is true (the research claims) it is a considerable step forward in treating male sterility."