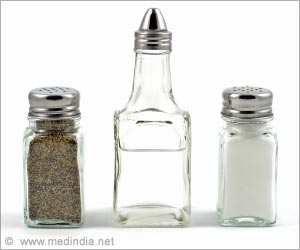 French wholesaler Alain Cohen is the gastronomic equivalent of a gold digger, constantly on the lookout for new culinary treasures. When he makes what he thinks is a major find he presents it to French celebrity chef Alain Ducasse - usually to discover Ducasse got there first.

With one exception. "The only time I caught him out was with citrus caviar," says Cohen, who specialises in fruits and vegetables.

Scientists Work With WHO to Fortify Condiments, Seasonings

University of Illinois scientists are contributing to World Health Organization (WHO) efforts to fortify seasonings and condiments for use in countries with widespread micronutrient deficiencies.
Advertisement

Plucked from the obscurity of the Australian rainforest, the small gherkin-shaped citrus is the hottest new thing in French cuisine. When squeezed, the "microcitrus australasica" - also known as finger lime - releases tiny caviar-like pearls of tart juice. A few seeds on an oyster, sushi, salmon or salad packs a powerful alchemical punch.


"The first time I tasted it I was overwhelmed," Antoine Heerah, a Paris chef who trained under Michelin three-star supremo Alain Passard, says, describing the fruit as "both playful and revolutionary".

The governments of Canada and Australia have been asked by the World Health Organization to explain their reasoning.
Advertisement
Playful, because the tiny pearls roll under the tongue and explode in the mouth, releasing a bitter, citrus flavour that is more acidic than a lime but softer than a lemon.

For Heerah, who runs the Chamarre Montmartre restaurant, the new ingredient is "very 21st century" -- simple to use but with the power to turn the mundane into the magical.

Both Cohen and Heerah are disciples of Michel and Benedicte Baches.

At their farm near Perpignan in southern France the couple both cultivate new citrus fruits and inject new life into existing varieties.

Michel happened upon the fruit about 25 years ago, shortly after Australian citrus growers brought it in from the wild and started cultivating finger lime.

Using imported seeds he began growing and experimenting with natural hybrids until he came up with his own variety, which he named "citron caviar" (citrus caviar).

The Australian fruit contains yellow seeds that are spicy in the mouth, with an acidic aftertaste. The skin, which can be dried and grated, contains notes of lemongrass and lemon balm.

The version developed by the Baches resembles a big olive, with a pink skin tinged with green and pearly pink seeds that are less sharply acidic and have a grapefruit or red fruits aroma.

Adding to its appeal, as Michel points out, is the fact that it has "no pips!"

"Demand has not stopped growing since 2000," said Georgie MacDougall of Australia's Wild Fingerlime Group, who exports the delicacy to Europe.

The celebrated Spanish chef Ferran Adria, who pushed the boundaries of cuisine with hi-tech methods to deconstruct and rebuild food in surprising ways, is touted as one of the first to use it on the continent.

"You must think of it as a condiment that can be used on sweet or savoury dishes," says Heerah.

"On its own, it's perfect on raw food, like carpaccio of scallops or sea bass. It creates a spectacularly attractive effect."

Removing the caviar gently from the fruit he lays it on a "creme chiboust", a type of pastry cream, that he has blended with a lime frozen parfait, then adds a drizzle of honey and pours on a coulis made from another fashionable citrus fruit, the Japanese yuzu.

"The chocolate surrounding the citric acid creates alchemy and explodes in the mouth," he says.

As the word gets out, the lime's luxury cousin is finding its way onto the high street, into France's luxury grocers.

With a retail price of about 100 euros ($117 euros) a kilo (2.2 pounds)-- about two euros a piece and more than twice the price in Australia -- it's one of the world's most expensive citrus fruits.

The high cost reflects the limited supplies of the produce.

Baches, the only known grower of citrus caviar in France, produces some 800-900 kilos a year. He is currently working on a new variety crossed with blood oranges, which should yield red seeds.

Outside of France, the Australians are getting back into the fruit, and the Californians and Israelis are also starting to grow their own, but for the moment, citrus caviar is still - as befits the name - a niche business.

Australian Doctors said Friday they have used hearts that had stopped beating in successful transplants, in a world first that could change the way organs are donated.
Advertisement
Advertisement
This site uses cookies to deliver our services.By using our site, you acknowledge that you have read and understand our Cookie Policy, Privacy Policy, and our Terms of Use  Ok, Got it. Close
×