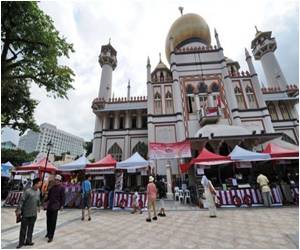 The foundation stone for what will be Slovenia's first mosque was laid by prime minister Alenka Bratusek on Saturday. The event happened 44 years after the initial request to build it was made.

The laying of the stone, in the presence of a government minister from Qatar which is helping to fund the project, was a "symbolic victory against all forms of religious intolerance", said Bratusek, adding that Europe would not be as culturally rich without Islam.

About 10,000 attended the ceremony in Ljubljana, according to an AFP photographer at the event.


Building will begin in November and should be finished by the end of autumn 2016. The cost of the project, which includes a Muslim cultural centre, is 12 million euros ($16 million), 70 percent of which will be met by the Qataris.
Advertisement
The first request to build a mosque in Slovenia was filed in 1969. In recent years the project has run into difficulty over the issue of land, but was eventually solved when the council in Ljubljana sold an area ready for construction to the Muslim community.

However, opponents of the mosque have twice tried to halt the project, once in 2004 and again in 2009, by asking for a referendum. The requests were denied each time by the constitutional court.

Some 47,000 Slovenians declare themselves Muslim, in a country of two million people. A 2002 census found that it was the second largest religion in the country behind Catholicism, which has 1.1 million followers. Muslim groups claim there are around 80,000 Muslims in the country.

There was a previous mosque in Slovenia, before it was an independent country, but it was abandoned and destroyed after World War One.

British College to Overturn Ban on Muslim Face Veils
Following widespread protests, one of Britain's biggest colleges revealed that it will be ......