Football Photography in the City of God 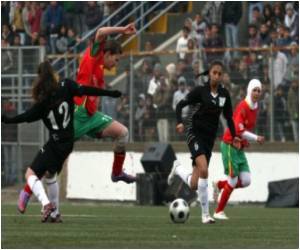 Brazil, the origin of Pele and so many other legends of football, is known for its street football.

He came up with the idea of giving cameras to children in the City of God favela so they could chronicle their love of football in their own way.


This is Simon's story of what happened next:

"In the favelas of Brazil, kids play football. All the time. Everywhere. With battered footballs, on dusty wastelands, kicking them against walls."
Advertisement
"In the run-up to the June-July World Cup, I was looking for a way to illustrate this Brazilian passion for soccer. And what could be better than to ask a bunch of these kids to let me see their passion through their own eyes?"

"Since arriving in Rio in 2010, I'd covered several 'pacification' operations by security forces in the favelas whose aim is to improve the image of this city ahead of the World Cup, and the Olympics two years later."

"Loaded with my cameras, I moved around, following the progress of the army and police through grubby little alleyways. Every time, I found myself surrounded by groups of kids who seemed to be fascinated by my work, who followed me everywhere and asked a thousand questions."

"I've just turned 50, an age when you start to want to pass on your skills to younger people. And this is how I got the idea for this project."

"I contacted camera maker Nikon and the company agreed to contribute 10 waterproof Coolpix cameras. In the Cidade de Deus, the City of God, one of the most infamous Rio favelas, I knew a certain Tony Barros, who was running a photo shop. I had met him through Nadine Gonzalez, a friend who set up a group called Modafusion that runs a fashion institute in the favela."

"Tony immediately became my greatest ally, and my passport to the neighborhood. He recruited the kids who were to accompany us for three-and-a-half months, and he opened all the doors plus got us out of a few hairy situations."

"Almost every weekend between February and May 2013 Tony and I went out with groups of three to 10 children between 10 and 15 years old. Each of them got a camera and was tasked with shooting pictures about football. The sessions usually lasted three to four hours, but could sometimes go on all day."

"The whole thing wasn't easy to organize. We had to pick up the kids from their homes, bring them home later, arrive in the same places at the same time, and make sure that none of us was in the pictures that we took."

"I taught the children the basics of my job and established a number of ground rules: never get people to pose (a challenge in a country where people like nothing better), and never use a flash."

"The experience was exhilarating and the results astonishing. If I had covered this topic alone, I would have used my own rules, my personal viewpoint. But this time it was the youths who got the chance to show their own environment and their passion for football. The outcome, I believe, is more authentic than anything I could have done."

"In the beginning I expected them to be showing me new things. But, to my surprise, it was often the other way around. It was me who opened the eyes of my 'students.'"

"Favelas have their own, unwritten rules. For example, everybody knows that it's best to turn a blind eye to what goes on in your neighbors' house. It's the kind of thing I didn't know when I got here with my novice's eyes." But I also taught them things, to become aware of a reality that had always been right before their eyes but that they'd never really seen.

"The Cidade de Deus may have been 'pacified' but that did not make it a trouble-free area. More than once we found ourselves face to face with drug dealers who were not exactly pleased to see all these cameras." But thanks to Tony's timely interventions, none of these situations ever turned bad.

"There was a lot of turnover among the participants. After some time, our project became well-known in the favela and there was an influx of hopefuls. A handful of the youths stuck with it all the way."

"Of those, I remember Kuhan particularly well. He was 10 and his parents were crack addicts. He was an incredibly lively and gifted child. Of the 50 pictures I selected at the end of the project, the best ones are, without doubt, by him."

AFP and Modafusion have launched a partnership to continue offering workshops for young people in the City of God through the 2016 Olympics in Rio.

Football is More Than Just a Game in Brazil
Former footballers have recalled that even in the days of Pele, the 1964-1985 dictatorship in the .....

World Cup With Vuvuzelas
In South Africa, the focus on football is shifting to something as mundane as the African horn ......

Football Hero Turns Liberia's Political Saviour
An impassioned speech about his nation's potential will be delivered by George Weah when asked ......