Food Poisoning Culprit E.Coli May Actually Be the Future of Renewable Energy 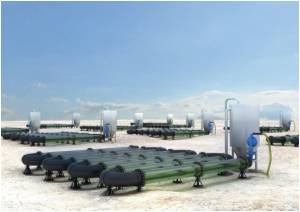 Unlike the popular correlation of E. coli with sickness and food poisoning, the malevolent bacteria may also be the key to the future of renewable energy, study suggests.

Desmond Lun of Rutgers University is apparently researching how to alter the genetic makeup of E. coli to produce bio diesel fuel derived from fatty acids.

Photosynthesis can be Used to Trap Carbon, Generate Renewable Energy

A project is investigating how coppiced trees and grass crops can be used both to generate renewable energy and to trap carbon in the soil over the long term, by a unique
Advertisement

"If we can engineer biological organisms to produce biodiesel fuels, we'll have a new way of storing and using energy," Lun said.


Creating renewable energy by making fuels, like making ethanol out of corn, has been a common practice in trying to achieve sustainability.

China's top legislative body adopted Saturday an amendment to the renewable energy law to require electricity grid companies to buy all the power produced by renewable energy generators.
Advertisement
However, Lun said, "It's widely acknowledged that making fuel out of food sources is not very sustainable. It's too expensive and it competes with our food sources."

One alternative is to modify the E. coli microorganism to make it overproduce fatty acids, which are used to make bio diesel.

"Fatty acid molecules aren't that different from a lot of fuel molecules.

"Biodiesel is something that we can generate quite easily. E. coli has been used as a lab organism for more than 60 years and it's well-studied. We know a lot about its genetics and how to manipulate it. We've got to make quite drastic changes to do it and it requires major intervention," he said.

Lun has build computational models of the E. coli organisms to determine what would happen if changes were made. Those changes could include removing enzymes to enhance fatty acid production.

"We call it synthetic biology," he said. "It's sort of the next stage of genetic engineering. Instead of making small changes to specific genes, we're really modifying large sections of genome.

Giving into strident opposition to emission curbs, the Kevin Rudd is now settling for a legislation that would focus only on renewable energy targets.
Advertisement
Advertisement

Consuming foods that have been contaminated with pathogens such as E.coli, Salmonella or Campylobacter, can ...

Organosphosphorus compounds are used as insecticides and chemical warfare. They are easily accessible, thus ...