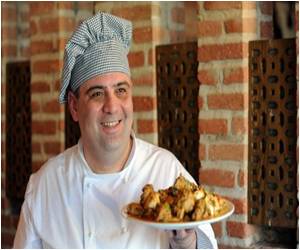 Food channels with celebrity chefs are a big hit these days and a fallout of this trend is, while they cook up a delicious spread, the viewers' appetite for fatty and unhealthy stuff is whetted.

A new study has claimed that such programs have sparked an obesity crisis, as they seem to egg people to eat fatty food.

This was revealed during a study which tested close to 900 recipes from 26 famous cooks and found that 87 percent did not meet the health recommendations as stipulated by the government.

Dr Ricardo Costa, senior lecturer in dietetics at Coventry University, said: "This study is not about naming and shaming celebrity chefs. However given the level of trust the public tends to place in the nutritional integrity of these cooks' recipes, it's important to highlight where they're falling short of healthy eating benchmarks."

Source: Medindia
Advertisement
<< How to Take the Right Decisions While Betting or Gambling i...
Facebook Interests Could Help Map Obesity >>

Junk Food may be Banned Near Schools
The Indian government is coming out with new guidelines that will ban the presence of any junk food ...

Children's Flavour Preferences are Not Stable
Children love fatty and sugary foods. Or do they? All children under the age of ten have the same .....