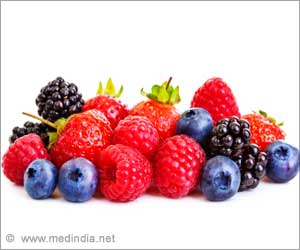 Eating fruits like berries which contain high levels of flavonoid content may reduce lung function decline due to aging, reports a new study.

The findings showed that high consumption of the flavonoids reduced decline in lung functions among both never smokers and those who had quit.

Advertisement
‘Consuming fruits rich in flavonoids like berries may slow lung function decline among both never smokers and those who had quit.’

"Our study suggests that the general population could benefit from consuming more fruits rich in these flavonoids like berries, particularly those who have given up smoking or have never smoked," said lead author Vanessa Garcia-Larsen from the Johns Hopkins University in Maryland, US.


However, "for smokers, quitting remains the best thing they can do to protect their health," she added.

The study, presented during the American Thoracic Society 2018 International Conference in San Diego, looked at anthocyanins -- natural plant pigments imparting red, blue, and purple colors to flowers, leaves, fruits, and some vegetables -- that was detected in lung tissue shortly after being ingested and in animals models of chronic obstructive pulmonary disease (COPD).
Advertisement
"The epidemiological evidence on the association between flavonoids and lung function is very scant. So we wanted to investigate whether dietary intake and anthocyanins are associated with lung function decline in middle-aged adults," Garcia-Larsen noted.

The study included data from 463 participants with an average age of 44. The participants completed a dietary questionnaire and underwent spirometry at enrollment and upon follow-up.

The researchers also analyzed the association between anthocyanin consumption and lung function in smokers, non-smokers and those who quit smoking and found anthocyanin intake is not linked with lung function among smokers.

Source: IANS
Advertisement
<< About a Quarter of the World's Population Will be Obese by 2...
Even The Slightest Hearing Loss When Young Can Affect Brain ... >>

Health Benefits of Flavonoids
Ever wondered what causes chocolate to prevent skin wrinkles? The answer is - flavonoids. Here's ......

Lobia
Lobia is commonly known as cowpea or black-eyed peas. The lesser-known lobia is brimming with nutrie...