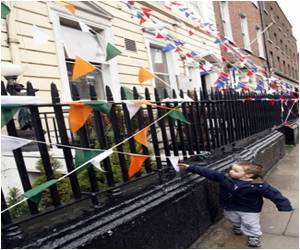 Giftshops are being filled with Plates, key rings and fridge magnets with the smiling faces of Spain's king-to-be Felipe VI and his queen Letizia ahead of their enthronement.

Souvenir stores are stacked with mugs and T-shirts that are already proclaiming them the "King and Queen of Spain", even though they have not been crowned yet.

Andrews wants overseas-trained doctor visa applicants to be cleared and screened by a doctor with at least 10 years' experience.
Advertisement

White flowers line the broad avenues leading across Madrid to the old Royal Palace, where the couple will wave from the balcony after Felipe is sworn in.


City Hall said it was hanging 16,000 flowers -- geraniums, chrysanthemums, lilies and petunias -- along the route that the couple's car will take after the swearing-in at parliament.

Wind density in the Indian state of Goa is simply not strong enough to produce grid quality power.
Advertisement
Red and yellow Spanish flags will adorn 470 lampposts and 730 buses, it said. Ten thousand flags have been handed out to taxis and a further 100,000 will be distributed to the public.

In a gift shop near the old palace, along with the usual football shirts and model bulls, shelves are stacked with sundry knick-knacks dedicated to Felipe and Letizia.

One shopper, Maria Teresa Gonzalez, 75, held up a replica "certificate" commemorating the enthronement.

"I have bought a key ring of the prince, who is going to be Felipe VI, and a pillbox, and now I am going to buy this," she said.

"I'll frame it as a souvenir of the coronation. I wish the new king and queen health and good luck, and I hope they can help the Spanish and end the crisis," she added.

"I find them charming, especially Felipe. How well their mother brought them up. So polite."

The factories making souvenir trinkets sprang into action after Felipe's father Juan Carlos unexpectedly announced on June 2 that he was abdicating.

"We have had only a couple of weeks to prepare all these items," said the shop's marketing manager, Sonia Arranda.

"As soon as we knew the date of the proclamation the marketing team got to work preparing them. We have pillboxes, magnets, key rings, badges, a china set with mugs, plates and trays, plus thimbles and T-shirts," she added.

"People are buying them as souvenirs of a historic occasion."

At the grand entrance of the lower house of parliament, the Congress, two bronze lions flank the doors through which Felipe will pass to be proclaimed king.

Workmen had put up a platform opposite for photographers and cameramen and were busy on Tuesday setting up a mobile television studio inside a great lorry to broadcast his arrival live.

Not far away, two vast red and yellow Spanish flags were being unfurled down the white stone facade of the city hall.

The conservative mayor of Madrid, Ana Botella, called on locals to hail the new king and queen by massing in the streets and squares and "adorning your balconies with the national flag".

Many Spaniards are demanding the right to vote on whether to have a king at all, however.

Protesters are planning a demonstration in central Madrid on the day of the enthronement, defying a ban by police.

They are angry at the scandals that have tainted Spanish politics and the monarchy over recent years, including a corruption probe implicating Felipe's sister Cristina.

"Preventing the demonstration is an unacceptable breach of the fundamental right to freedom of expression," said Angeles Maestro, a spokeswoman for the campaign movement Republican Coordinator.

"We are a symbol of thousands of people who denounce the unworthy spectacle of corruption."