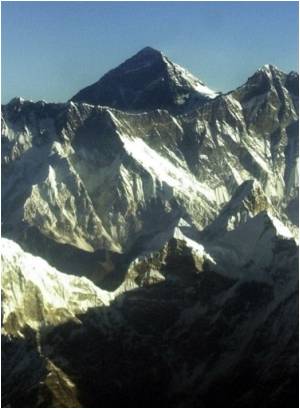 Arunima Sinha, 26, from the northern state of Uttar Pradesh, reached the peak on Tuesday morning after a slow climb from Everest Base Camp.

"She left high camp at 6pm on Monday evening and arrived at the summit at 10:55 am (0510 GMT) on Tuesday," Ang Tshering Sherpa, founder of Asian Trekking, the company that organised the expedition, told AFP.


Sinha's guides were concerned about her slow pace until the team reached an 8,750-metre (28,707 foot) junction that climbers pass through on their way to the top of the mountain, Sherpa said.
Advertisement
"But once she got to that point, she gained energy and confidence and started moving really quickly," Sherpa said.

Two years ago, the former national-level volleyball player was shoved from a moving train by thieves when she reportedly attempted to fight them off as they tried to stealing her purse.

A passing train crushed her left leg, forcing doctors to amputate below the knee to save her life.

"At that time everyone was worried for me. I then realised I had to do something in my life so that people stop looking at me with pity," Sinha told Indian TV before leaving for the climb.

The Tata Steel Adventure Foundation, which sponsored Sinha's climb, contacted Sherpa's Asian Trekking company in 2012 about providing training and guiding for the expedition.

"We knew her story, we knew she recovered well from the amputation because she's a very active athlete," Sherpa said, adding that the company trained her on Nepal's Island Peak during the 2012 spring climbing season.

Hundreds of climbers have thronged the world's highest peak during a window of good weather. May is considered the best time for climbing in the Nepalese Himalayas because of mild weather and some 300 people have reached the 8,848-metre high Everest so far this year.

The mountain has become a popular symbolic pilgrimage site for record-setting, awareness-raising, and pledge drives for charities, which have increased crowds on the peak.

Tom Whittaker, a British mountaineer, became the first person with a disability to summit the peak in 1998 after a car crash almost two decades earlier had forced him to have his foot amputated.

Climate Change to be Studied With Help of Mount Everest Ice Cores
An expedition leader has said that Chinese scientists have obtained three ice cores from Mount ......

Down Syndrome No Hindrance for a 15-Year-Old Boy in Climbing Mount Everest
A 15-year-old US boy with Down syndrome scales Mount Everest and reaches the base camp in Nepal in ....

Phantom Limbs can be Felt Even by Non-Amputees
A new study published in the US Journal of Cognitive Neuroscience reveals that even non-amputees ......

Artificial Limbs
Research in the field of bio engineering and advanced amputation procedures have given improved mode...