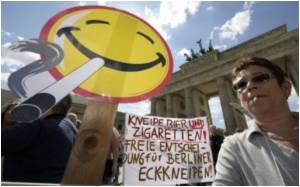 The anti-smoking lobby in Germany, encouraged by the total ban on smoking in public places in Bavaria, called for similar action across the country.

Sixty-one percent of people voting Sunday in the southern state were in favour of the ban, meaning the tents at the world-famous Oktoberfest beer festival will be smoke-free from 2011.

In the wake of the result, campaigners called for similar votes in other German regions, including the city-states of Berlin and Hamburg, and opposition deputies said a strict nationwide ban in bars and restaurants could be considered.


"Either we ban smoking or we don't ban smoking. If we do ban it, it should be done at the national level like it was in Bavaria, i.e. without exceptions," said the health spokesman for the Social Democrats (SPD), Karl Lauterbach.

Smokers can light up cigarettes in more places in Germany's Bavaria, including under the tents of Munich's beer bash Oktoberfest, after state lawmakers Wednesday relaxed an anti-tobacco law.
Advertisement
Carola Reimann, also from the centre-left SPD and a member of the health committee in the German parliament, said the vote in Bavaria was a "very, very clear signal."

However, smoking legislation is a matter for Germany's 16 states and the federal health minister has already said the issue does not fall within his remit.

Around one-quarter of Germans are smokers -- around average for the European Union according to Eurostat figures -- and the tobacco lobby has a strong influence in the country.

The last of Germany's 16 states made lighting up in bars and restaurants largely illegal from July 2008, driving many smokers out of pubs.

However, the law was riddled with loopholes and many pub owners managed to circumvent it.

Source: AFP
Advertisement
<< Four Shipping Companies And A Captain To Stand Trial Over O...
Packaged Salads, Melamine in Food - Under New Regulation by ... >>

How to Reduce School Bag Weight - Simple Tips Noscaphene (Noscapine) A-Z Drug Brands in India Nutam (400mg) (Piracetam) Calculate Ideal Weight for Infants Color Blindness Calculator The Essence of Yoga Blood Donation - Recipients Vent Forte (Theophylline) Blood Pressure Calculator
This site uses cookies to deliver our services. By using our site, you acknowledge that you have read and understand our Cookie Policy, Privacy Policy, and our Terms of Use