Fewer Latinos in US are Catholics 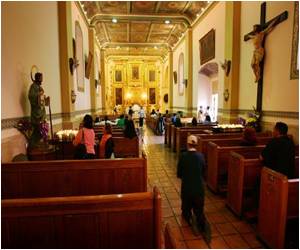 Though the increasing number of Latinos are becoming Protestants, the fewer Latinos in the United States still adhere to the Roman Catholic Church.

Fifty-five percent of the 35.4 million Latinos in the United States identify themselves as Catholics, down from 67 percent just four years ago, according to the Pew Research Center report.

Pre-diabetes indicators were reduced in a Latino population at risk for developing diabetes by an inexpensive, culturally sensitive diabetes prevention program
Advertisement

The change may reflect what's happening in historically Catholic Latin America, where evangelical churches have been gaining ground and the proportion of those with no religious affiliation has been rising, Pew said.


"But it also reflects religious changes taking place in the US, where Catholicism has had a net loss of adherents through religious switching (or conversion) and the share of the religiously unaffiliated has been growing rapidly in the general public," it said.

Even Physicians of Latinos Have Trouble Delivering Quality Healthcare: Study

Experts have written about health care disparities between Latinos and non-Latino whites, mostly from a policy standpoint.
Advertisement
Of the 22 percent of all US Latinos who identify as Protestant, the vast majority regard themselves as evangelicals. Meanwhile, 18 percent of all Latinos consider themselves unaffiliated with any faith group.

"Together, these trends suggest that some religious polarization is taking place in the Hispanic community, with the shrinking majority of Hispanic Catholics holding the middle ground between two growing groups (evangelical Protestants and the unaffiliated) that are at opposite ends of the US religious spectrum," Pew said.

Hispanics are, after non-Hispanic whites, the biggest race or ethnic group in the United States, according to the US Census Bureau -- and, after Asians, they are the fastest-growing as well.

Pew, which used the terms Hispanic and Latino interchangeably, based its research on a survey it conducted among 5,103 adults between May 24 and July 28 last year, giving a margin of error of 2.1 percentage points.

Victims of bullying suffer academically, particularly so in the case of blacks and latinos, says new research to be presented at the 106th Annual Meeting of the American Sociological Association.
Advertisement
<< 'Yawning' Has 'Cooling' Effects on the Brain
One-Third People are Able to Fool Others by Pretending to L... >>

Drug Side Effects Calculator Drug - Food Interactions A-Z Drug Brands in India How to Reduce School Bag Weight - Simple Tips Blood Donation - Recipients Daily Calorie Requirements The Essence of Yoga Blood - Sugar Chart Color Blindness Calculator Drug Interaction Checker
This site uses cookies to deliver our services. By using our site, you acknowledge that you have read and understand our Cookie Policy, Privacy Policy, and our Terms of Use

Fewer Latinos in US are Catholics Personalised Printable Document (PDF)