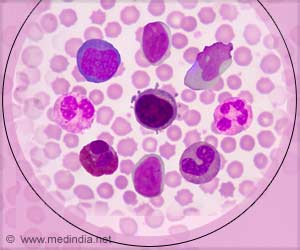 The U.S. Food and Drug Administration has approved ibrutinib and rituximab combination for treating patients with chronic lymphocytic leukemia (CLL) or small lymphocytic lymphoma based on data from E1912, a phase 3 trial developed and led by the ECOG-ACRIN Cancer Research Group (ECOG-ACRIN).

The E1912 study showed that the ibrutinib-rituximab combination not only provided better leukemia control, it also prolonged life and had fewer side effects when compared with the standard chemotherapy/immunotherapy of fludarabine, cyclophosphamide, and rituximab (FCR).

Chronic Lymphocytic Leukemia (CLL) is one of the most common types of adult leukemia and is considered as one of the 'good cancers'.
Advertisement
‘E1912 study showed that the ibrutinib-rituximab combination not only provided better leukemia control, but also prolonged life with fewer side effects compared to the standard chemotherapy/immunotherapy of fludarabine, cyclophosphamide, and rituximab.’
Read More..

The E1912 trial was sponsored by the National Cancer Institute (NCI), part of the National Institutes of Health. The importance of these findings is reinforced by the breadth of participation of academic and community institutions that together completed this innovative study.


CLL is one of the most common types of leukemia in adults. It typically occurs during or after middle age and rarely occurs in individuals under the age of 40. Ibrutinib (Imbruvica®, Pharmacyclics, an AbbVie company/Janssen) is a Bruton's tyrosine kinase (BTK) inhibitor that interferes with the survival of lymphocytic leukemia cells.
Advertisement
Rituximab (Rituxan, Roche/Genentech, and generics) enhances the ability of the body's immune system to destroy the cells. The FDA had previously approved ibrutinib as monotherapy, in combination with obinutuzumab, or in combination with bendamustine and rituximab (BR) for patients with CLL.

In addition to ECOG-ACRIN, the E1912 trial represents a collaboration with the Alliance for Clinical Trials in Oncology, NRG Oncology, and SWOG cooperative groups in the NCI's National Clinical Trials Network. These groups participated in the design and conduct of the trial and supported the enrollment and treatment of the 529 patients.

The trial met its primary endpoint of an improvement in progression-free survival (the length of time patients live before their disease worsens). The combination also improved overall survival, the trial's secondary endpoint. In general, patients in the ibrutinib-rituximab arm were less likely to experience serious side effects than those in the standard treatment arm.

The New England Journal of Medicine published final results in August 2019. Those results reported a two-thirds reduction in the risk of disease progression and less toxicity from therapy with ibrutinib plus rituximab compared to standard FCR.

Dr. Shanafelt presented results from an extended follow-up analysis of patients in E1912 at the ASH annual meeting in December 2019. The analysis provided new safety and efficacy information on the patients in E1912 who completed six months of combined ibrutinib plus rituximab therapy and continued to receive ibrutinib alone for as long as it remained effective. The analysis, based on a median follow-up of 48 months, reported that 73% of patients in the ibrutinib plus rituximab treatment arm remained on ibrutinib.

At the time of that report, the median time on treatment was 43 months (range of 0.2 to 61 months). The median time to progression or death after discontinuing ibrutinib was 23 months. Superior progression-free survival benefits were sustained for the ibrutinib plus rituximab arm compared to the FCR treatment arm (hazard ratio [HR]=0.39; 95 percent CI, 0.26-0.57; p<0.0001).

The only pretreatment characteristic that predicted discontinuation of ibrutinib for a reason other than progression was the number and severity of health problems other than CLL.