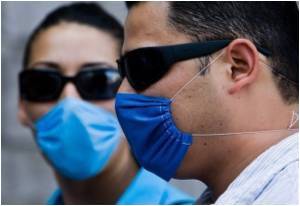 Scientists from the National Institute of Allergy and Infectious Diseases (NIAID), part of the National Institutes of Health, review the fates of previous pandemic influenza viruses in the years following a pandemic and speculate on possible future courses for the 2009 pandemic H1N1 (pH1N1) virus during the upcoming flu season and beyond in a new commentary.

The authors estimate that at least 183 million Americans (about 59 percent of the total U.S. population) have some immunity to pH1N1 because they were exposed to related viruses or vaccines prior to 2009, were immunized against pH1N1 or developed immunity following infection with the pandemic virus.

To stay in circulation in the face of such high levels of population immunity, the pH1N1 virus must adapt either through abrupt or gradual changes. The authors briefly examine a number of earlier pandemics and trace paths taken by the causative viruses. Somefor reasons not well understooddied out, while others, like those of 1889 and 1918, returned in an explosive fashion. Such an explosive return of pH1N1 virus is unlikely, note the authors, because global levels of immunity are already high and will increase further through immunization with 2010-2011 seasonal influenza vaccines, which contain the pH1N1 strain.


In light of what is known about pH1N1, the NIAID authors express a cautious optimism that unless it disappears entirely the virus will follow a route like that of 1968 pandemic virus, that is, it will persist in a form that causes relatively few deaths.

EMA Finds No Link of Swine Flu Vaccine and Narcolepsy

The European Medicines Agency said Thursday it had found no link between the Pandemrix swine flu vaccine and the sleeping disorder narcolepsy amid patient concerns, notably in Scandinavia.
Advertisement
Nevertheless, the authors caution against complacency. As they acknowledge, many gaps remain in understanding how a given pandemic influenza virus adapts to increased immunity in humans. For that reason, influenza vaccination for everyone older than six months is a wise public health measure to maintain high levels of population-wide immunity. Immunization with 2010-2011 seasonal flu vaccine is particularly urged for babies older than six months, children, teens and young adults as the best way to protect individuals in those potentially more susceptible age groups from illness.

Australian health officials on Friday revealed the country's first case of swine flu resistant to antiviral drug Tamiflu, but insisted the public was not at risk.
Advertisement
Advertisement