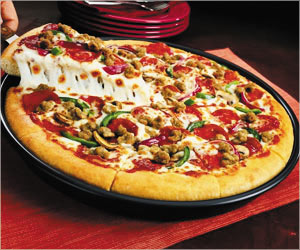 The researchers found that only a small fraction of fast-food eaters - as little as 8 percent - are likely to make healthy choices as a result of current calorie labeling. The study comes just six months before a federal policy goes into effect requiring calorie labeling nationwide and provides recommendations for improving labeling that could boost the odds of diners making healthy choices.

Popular US fast-food chain Chipotle made an unusual request at a burrito restaurant, asking customers to leave their guns at home after some showed up carrying assault rifles over the weekend.
Advertisement
‘Calorie labeling on fast-food restaurant menus was designed to motivate consumers to change their behavior by providing them with health information.’
Tweet it Now

"Health policies would benefit from greater attention to what is known about effective messaging and behavior change. The success of fast-food menu labeling depends on multiple conditions being met, not just the availability of calorie information," said study author Andrew Breck, a doctoral candidate at NYU Wagner Graduate School of Public Service.


Calorie labeling on fast-food restaurant menus was designed to motivate consumers to change their behavior by providing them with health information. In 2006, New York became the first city to introduce labeling requirements for fast-food chains; Philadelphia and Seattle followed shortly after. On May 5, 2017, calorie labeling will go into effect nationwide, with the Food and Drug Administration requiring all chain restaurants with at least 20 locations to post calorie information.

An estimated third of adult Americans are obese and that number is expected to rise to 42 percent by 2030, among the highest of any country in the world.
Advertisement
But despite the rapid and widespread adoption of policies to require calorie counts at restaurants, most studies of calorie labels in fast-food restaurants in places that have already adopted labeling, including New York, have found little evidence that fast-food consumers are changing their behaviors in response to the labels.

These surprising findings become less so in light of research suggesting that simply providing calorie information may not create change. A framework created by Scot Burton of the University of Arkansas and Jeremy Kees of Villanova University outlined five conditions that need to be present in order for people to be swayed by calorie labeling at fast-food chains: Consumers must be aware of the labeling. Consumers must be motivated to eat healthfully. They must know the number of calories one should eat daily to maintain a healthy weight. Labeling must provide information that differs from consumers' expectations of how many calories foods contain. Labeling must reach regular fast-food consumers.

In this study, the NYU researchers used Burton and Kees' framework to better understand why menu calorie labeling policies have had a limited impact. The researchers used data collected in Philadelphia shortly after calorie labeling went into effect in the city in 2008. They analyzed responses from 699 consumers who completed point-of-purchase surveys at 15 fast-food restaurants throughout Philadelphia, as well as responses from 702 phone surveys of the city's residents.

The surveys helped the researchers understand which of the conditions outlined by Burton and Kees were met. For instance, they asked if consumers noticed seeing calorie information in a fast-food restaurant and prompted them to estimate how many calories they should be consuming daily.

Based on the two surveys, the researchers found that a small minority of fast-food consumers met all conditions, and therefore would be expected to change their eating behavior as a result of menu calorie labeling. Only 8 percent of those surveyed in fast-food restaurants and 16 percent of those surveyed by phone met all five conditions: they were aware of menu labeling, were motivated to eat healthfully, could estimate their daily calorie intake, were surprised by calorie counts, and ate fast food ate least once a week.

A third of those surveyed by phone did not see calorie labels posted and nearly two thirds surveyed at point-of-purchase did not notice the calorie information. As a result, the researchers recommend that restaurants make calorie information more visible to consumers through clear signage and fonts that are large and in a noticeable color.

In addition, the researchers cited past experiments showing that people responded to calorie labeling on menus that included the average recommended daily calorie intake, or explained how much exercise would be needed to burn off different foods. While these experiments have not been used in the real world, these potential labeling improvements may hold value based on the lack of nutritional knowledge in the current study. Three-quarters of those surveyed by phone correctly estimated the number of calories they should consume daily, but this was true of less than half of those surveyed at point-of-purchase.

The researchers also note that the visibility of calorie labeling may encourage change through a different pathway: it may spur restaurants to reduce the calorie content of existing menu items and provide additional lower calorie options.

"We know that few regular fast-food eaters chose fast food because it is nutritious; they instead are motivated by cost and convenience," said study author Beth Weitzman, professor of public health and policy at NYU Steinhardt School of Culture, Education, and Human Development. "However, requiring restaurants to make the calorie content of their menu items highly visible could cause restaurants to add new, healthy options to their menus."

A new study led by the University of Leicester has discovered that how close you are to fast-food outlets may be linked to your risk of Type-2 diabetes and obesity.
Advertisement

Just like a pedometer counts aerobic steps, the bite counter counts every bite taken. It rings an alarm on ...

A balanced diet is the cornerstone of good health. With diabetes, obesity, heart ailments rapidly emerging as ...

For healthy eating during the festival of lights use fiber rich foods. It is possible to make low calorie ...

Low calorie meals or diet include foods that are high on nutritional content and yet have fewer calories. ...