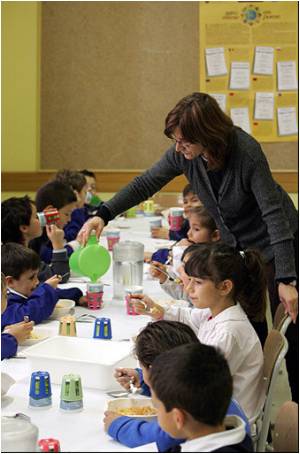 Extraverted and introverted children respond differently to environmental cues, such as plate size, when it comes to portion control, reveals a new study.

Researchers at the Cornell Food and Brand Lab examined the breakfast behaviours of kids, ages 6 to 10, in a within-subject study.

First, adults served breakfast: after being given a large bowl kids indicated how much milk and cereal they wanted for breakfast and the adults served them accordingly.


Next, on a different day, the children were in charge: they were given a large or a small bowl, but they then served themselves as much as they wanted.
Advertisement
To determine each child's personality type, four teachers and counsellors rated each child's degree of introversion and extraversion on a scale of 1 to 9.

Researchers used the average of these scores to classify each child as an introvert or an extravert. To measure the amount of food children asked for or served themselves, researchers weighed each student's serving through scales hidden in the table. The serving sizes were then compared for introverts and extraverts.

It was found that when serving themselves, extraverted kids were far more likely to be impacted by the size of the bowl; they served a heaping 33.1 percent more breakfast in the large bowl, compared to introverted kids who only served themselves 5.6 percent more when bowl size increased.

This benefit for introverted kids, however, is only present when serving themselves; when served by adults, all kids requested more cereal to fill up the large bowl than the small bowl.

Extraverted children appear to be highly influenced by environmental cues when serving themselves, filling their big bowls to the brim when left in charge of their own portions. These extraverts may benefit from having an adult serve. I

Introverted kids, however, are less likely to base portions on bowl size only when serving themselves, so parents may want to allow young introverts to serve their own food to avoid dish-size bias.

The study is published in the journal PLoS ONE.

Personality Types
Personality is to a man what perfume is to a flower. Understanding different personalities types ......

How Extroverts and Introverts Process Rewards
Experiences in life are processed by extroverts and introverts differently, a recent study has ......

Open-Plan Offices may Increase Stress for Introverts
A psychologist has suggested that people with introvert personalities may struggle with excess ......