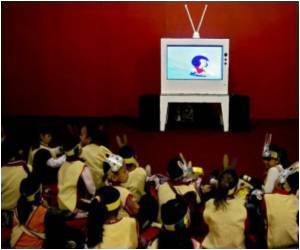 Watching too much television or spending  more  time on the computer was never known to be good.

A recent study has shown that children who watch television instead of engaging in physical activity have narrower arteries in their eyes compared to their more active counterparts.

Reye's syndrome is a medical emergency chiefly affecting children and teenagers and is marked by the rapid development of life-threatening neurological symptoms.
Advertisement

Narrowing of retinal arteries is an indicator of elevated risk of heart disease and hypertension in the later years.


It is important that children reduce their time spent on the electronic screen and instead head out for at least an hour of physical activity.

Nutam (400mg) (Piracetam) Loram (2 mg) (Lorazepam) Pregnancy Confirmation Calculator Iron Intake Calculator The Essence of Yoga A-Z Drug Brands in India Diaphragmatic Hernia Color Blindness Calculator Noscaphene (Noscapine) Accident and Trauma Care
This site uses cookies to deliver our services.By using our site, you acknowledge that you have read and understand our Cookie Policy, Privacy Policy, and our Terms of Use  Ok, Got it. Close
×