Every Child Has Right to Take Advantage of All Facilities 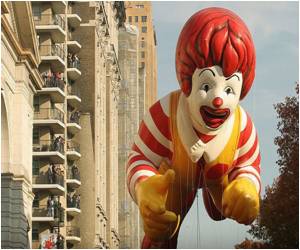 Child rights activist Archana Sahay condemned the incident of an underprivileged child being thrown out of a McDonalds restaurant in Pune, saying every child had the right to access all amenities.

"Every child has the right to take advantage of every facility and such kids for whom McDonalds is like a dream, so people should rather encourage it," Sahay told to ANI.

"I condemn what the McDonalds staff has done," she added.


Sahay also applauded the woman's act that took the child to the restaurant and provided him what he desired.

Sahay said a letter should be issued to McDonalds by the Collector of Pune to say that the staff action was wrong and that should it should never recur.
Advertisement
In a shocking incident, a street child in Pune was thrown out of a McDonalds restaurant when he entered to buy a Fanta float.

The boy was accompanied by a woman to the restaurant, who later discussed the incident on Facebook.

Describing the incident, the woman said she along with some of her friends had gone to the fast food outlet when they met the child. Curiously looking at the Coke floats that she and her friends had bought, the child in sheer innocence asked if he could have some.

The woman went inside the restaurant with the child and asked him whether he would want to stand in the line with her to which he agreed.

The McDonalds staff, however, pushed him away, saying 'these kind of people aren't allowed' in the restaurant.

McDonalds later issued a statement saying, "We wish to affirm that we treasure and respect everyone in equal measure and do not support any form of discrimination."

The restaurant issued a statement saying, "We are investigating internally an issue that has been reported on an incident involving a street child. We wish to affirm that we treasure and respect everyone in equal measure and do not support any form of discrimination. We shall be examining if our employees have in any manner breached basic courtesy and respect and take appropriate action. McDonald's seeks to provide all our customers a safe and welcoming environment. We will always ensure that our guests feel comfortable, safe and looked after."

Meanwhile, Maharashtra Chief Minister Devendra Fadnavis stated that he would get back to the media after he had collected all the information on the incident.

NGO Demands Ban of Junk Food in and Around School Premises
To encourage healthy eating habits among school children, an NGO has asked to ban junk food and ......

Centre Urges States to Prohibit Corporal Punishment in Schools
The central government has written letters to all state governments to prohibit corporal punishment ...

Burger King and McDonalds Move Towards Healthier Food
Research has indicated that fast food chains are slowly moving towards offering healthier food for ....