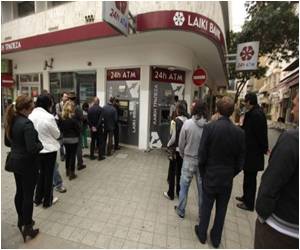 The Cyprus Red Cross has long cared for the needy, but the island's financial woes run so deep that people unaccustomed to hardship including some who still drive BMWs are turning up for food aid.

Anxious families waited at the organisation's headquarters in the Cypriot capital on Monday to collect boxes of pasta, rice, coffee, tea, sugar and tinned meats to keep them going for the next week.

In the past, recent arrivals mainly from Africa, Asia and the Middle East filled the waiting room, but now Cypriots of all stripes wait in line to receive food and clothing packages.


"Nowadays, we mostly help Cypriots. We see people coming here to collect food in BMWs and Mercedes," Takis Neophytou, general director of the Cyprus Red Cross Society, told AFP.
Advertisement
"A few months ago you can see that they would have had comfortable lives. It's very sad."

He estimated that the Red Cross is now feeding 1,000 people monthly, up from 300 before the crisis.

Cyprus narrowly avoided bankruptcy last month after talks with the "troika" of the European Union, European Central Bank and International Monetary Fund guaranteed a 10-billion-euro ($13-billion) bailout for the island.

The deal stipulates a drastic restructuring of the banking sector that is certain to affect the eastern Mediterranean island's economy and have severe social repercussions.

Many of those queueing on Monday were there for the first time to receive food, having recently lost jobs or been hit by the effects of the bailout deal on banks.

Costas Costaris, 48, an unemployed father of one, has lived in government housing since his family fled their home in the north during the Turkish invasion in 1974, but never needed help supporting his family before.

"Before, I worked as a lorry driver, and I did not need to come, but I have not worked since December," he said. "Now I'm just happy because there is someone helping us out now."

One single mother came to pick up food for herself and her four children because her social services payment was delayed this month.

"I have no idea how I will cope if this continues because I have a baby and at the moment my husband does not give me an allowance," Georgia Yiannou, 27, told AFP.

In little more than one hour, the bustling Nicosia depot handed out food parcels to over 40 people, but Fotini Papadopoulou, president of Cyprus' Red Cross, warned that they were struggling to cope with the demand.

"At the moment we cannot buy new food and clothing supplies because our account with Laiki Bank has been frozen," she said.

Other charities have also started handing out food across the island, bringing much-needed support to those struggling with the current economic climate in Cyprus.

Local charity Alkionides used to advise members of the diaspora in Britain and help students in Cyprus, but recently it has launched bi-weekly food distributions on the outskirts of Nicosia.

"Things have been getting worse over the past year and a half, but the situation has deteriorated rapidly after the euro group bailout last month," she said.

"Now we expect to feed many, many more people as unemployment rises."

So far, those who have gone to Alkionides for help are still coming to terms with what has happened.

"People aren't angry, there's a mood of resignation and acceptance at the distributions. People are still numb, and want to know why this has happened."

Fertility Doc Sent Couples to Cyprus for Gender Selection
A NHS fertility doctor is in trouble after he was accused of sending couples to a clinic in Cyprus ....

Naked Goddess On Cyprus Passport Creates Stir
A picture depicting a naked Aphrodite on the new biometric passports being issued by Cyprus has ......