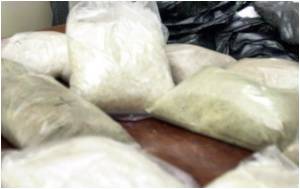 More than two tonnes of heroin has been discovered in Greek warehouses in as many weeks in what authorities claim to be Europe's largest ever seizure of the drug.

Close to a tonne was found by police in a warehouse near Athens on Friday, a little more than a week after an even bigger haul in the city.

Ease of Access and Cheaper Cost Attracts Addicts to Heroin

Researchers have found that addicts often switch to heroin use as it is cheaper and easier to get compared to prescription painkillers.
Advertisement

Merchant Marine Minister Miltiadis Varvitsioti said Sunday that the discoveries constituted "the largest amount of heroin ever seized in Europe".


Friday's haul of 986.6 grammes had been brought into Greece on a tanker, which has also been seized, the Greek port police said Sunday.

The tanker, named Noorl, is a Togo-flagged ship belonging to a Greek company whose name has not yet been released.

Dominant Discoveries and The Darker Side Of Methamphetamine Drug Addiction

Antidepressant therapy with bupropion may hold the key towards methamphetamine addiction
Advertisement
Fourteen arrests were made in connection with Friday's seizure in Koropi, around 40 kilometres (25 miles) from Athens.

Those arrested included 10 tanker crew members -- among them five Turkish nationals -- and the Greek head of the company that owns the ship. Three others implicated in the affair were also detained.

That seizure came hot on the heels of another major bust, on June 12, when 1.113 tonnes of heroin was found in another warehouse in the city.

The raid was carried out in coordination with the US Drug Enforcement Adminstration, the Greek coastguard said in a statement.

Eleven people were arrested following that discovery, including a shipowner.

The illegal drug was meant to be transported by truck from Greece to markets around Europe.

To marshal worldwide support for the control of drugs, the 26th of June every year is devoted to the cause, known as the International Day against Drug Abuse and Illicit Trafficking.
Advertisement
<< Lawsuit on Burger King for Cooking Veggie Food in Meat Oil
Earliest Drawings of French Cave Wins World Heritage Status >>

In White US Suburbs, the Drug of Choice is Heroin