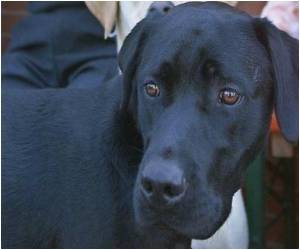 Over 90 percent of humans possess antibodies to the Epstein Barr virus. Best known for causing mononucleosis, or `the kissing disease`, the virus has also been implicated in more serious conditions, including Hodgkin's, non-Hodgkin's and Burkitt's lymphomas. Yet little is known about exactly how EBV triggers these diseases.

Now a team of researchers from the University of Pennsylvania School of Veterinary Medicine and Penn's Perelman School of Medicine has the first evidence that an Epstein Barr-like virus can infect and may also be responsible for causing lymphomas in man's best friend.

The findings suggest that domestic dogs possess a similar biology to humans with respect to EBV infection. That could allow scientists to study dogs to help uncover the mechanisms by which EBV leads to cancer in certain people.


"There are no large-animal spontaneous models of EBV infection and virus-associated disease, and most studies investigating viral disease are performed in non-human primates, which are very expensive," said Nicola Mason, senior author of the study and an assistant professor of medicine and pathobiology at Penn Vet. "Discovering that dogs can get infected with this virus like people do may provide us with a long-sought-after model for EBV-associated disease."
Advertisement
Mason's team at Penn Vet included Shih-Hung Huang, Philip Kozak, Jessica Kim, George Habineza-Ndikuyeze, Charles Meade, Anita Gaurnier-Hausser and Reema Patel. The team worked closely with Erle Robertson, professor of microbiology at the Perelman School of Medicine.

Their work was published online March 8 in the journal Virology.

In humans, the Epstein Barr virus infects B cells. After an acute phase of infection, of which many people are not even aware, the virus goes into a latent phase. Most people show no symptoms during this phase, but, in some, EBV promotes unnatural growth of B cells, which contributes to the development of lymphoma.

Meanwhile, dogs develop lymphomas that share some characteristics with the human equivalents. These conditions are relatively common in certain breeds. In golden retrievers, for instance, one out of every eight dogs develops lymphoma.

Yet, "the paradigm up until now was that EBV only infects humans," Mason said. "It is an extremely successful virus, and most people are infected. Since humans and domestic dogs have cohabited for around 15,000 years, we hypothesized that the virus may have adapted to another host. "

To search for evidence of infection, Mason and colleagues obtained samples of blood from client-owned dogs of various breeds brought to Penn Vet for care. In 48 dogs with lymphoma and 41 without the disease, the researchers first looked to see if the pets had antibodies against proteins specific to the EBV capsid, the protein shell of the virus. The test is nearly identical to one that physicians use to detect exposure to EBV in humans.

The researchers observed that eight of the dogs with lymphoma and three of those without it had high levels of antibodies against EBV proteins, indicating that a portion of the dogs had been exposed to a virus very similar to EBV.

While the presence of antibodies confirms that a dog has been exposed to a virus, the team wanted to know whether the virus had a direct association with the tumors in dogs with lymphoma. Finding viral elements, including DNA, within lymphomas in humans is an indication that the tumor is associated with the virus, therefore Penn researchers looked to see if they could find virus in the dog tumors.

Using the polymerase chain reaction, which amplifies specific DNA sequences, the researchers analyzed lymph nodes of dogs with and without B cell lymphoma. In two dogs with lymphoma, they were able to identify a portion of DNA very similar to a sequence in EBV. They found no evidence of the same DNA in the healthy dogs.

Finally, examining cancerous B cells under an electron microscope revealed what appeared to be viral particles, similar to what what has been seen in the tumor cells of humans with EBV-linked lymphomas.

Taken together, the researchers' discoveries indicate that some dogs are naturally infected with a virus similar or identical to EBV and that, as in humans, the virus appears linked in certain cases with canine lymphomas.

That such a large percentage of humans are exposed to EBV and yet only a small fraction develop cancers indicates that there may be a genetic component to EBV-associated cancer susceptibility.

"With additional studies within certain breeds of dog," Mason said, "we hope to provide insights into genetic factors that may predispose to virus associated lymphoma. Furthermore, this spontaneous dog model may help us evaluate new treatments for EBV-related lymphomas or investigate strategies to prevent those cancers from developing in the first place."Source: Eurekalert
Advertisement
<< Many Employees Quit Their Jobs When They Feel Underapprecia...
Doctors' Efficiency Enhanced by Personal Mobile Computing >>

Malaria Parasite can Cause Severe Lymphatic Cancer
Researchers have found that a cancer of the lymphatic system, Burkitt's lymphoma, can be initiated ....