Enjoying the Benefits of Estrogen Without Cancer Risk 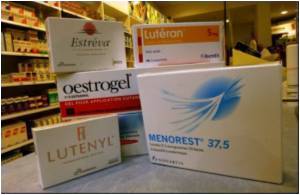 Scientists have found a way to get the best benefit of estrogen without increasing the risk of cancer.

Researchers at UT Southwestern Medical Center have pinpointed a set of biological mechanisms through which estrogen confers its beneficial effects on the cardiovascular system, independent of the hormone's actions on cancer.

The study suggests that drugs targeting a specific subpopulation of estrogen receptors found outside the cell nucleus might activate the cardiovascular benefits of estrogen without increasing cancer risk.


"Finding a way to get the beneficial effects of estrogen without increasing a woman's risk of cancer is something that could make a big difference to a lot of people," said Dr. Philip Shaul, professor of paediatrics.

The frequency of the hot flash can be from 1 to 2 two hot flashes a week to 10 or greater in a day. The silver lining is that it usually decreases over time.
Advertisement
The researchers created and tested in mice a synthetic molecule to determine the mechanisms by which estrogen promotes blood vessel health.

Estrogen receptors - or molecular "docking points" for the hormone - usually are found in the cell nucleus.

A small subpopulation is also found outside the nucleus of certain cells, including the endothelial cells that line arteries and veins.

Tamoxifen, a drug taken by millions of breast cancer patients, is also a SERM.

"We have discovered that the small population of estrogen receptors outside the nucleus of endothelial cells has a unique means to activate cell growth and migration, which are important to blood vessel maintenance and repair, and to regulate the production of nitric oxide, which is a protective molecule in the vascular system," said Shaul.

"Whereas all existing estrogen-related drugs change the function of the nuclear receptors which stimulate cancer cell growth, the synthetic molecule targets only the non-nuclear estrogen receptors. We're at the stage where we can start to think about how to translate these findings to humans," he added.

In the study, the researchers examined female mice with high cholesterol and injured carotid arteries, which become substantially blocked if the ovaries have been removed, mimicking diseased arteries in the heart and brain that cause heart attacks and strokes.

When researchers treated the injured mice with the new molecule, the arteries remained clear and unobstructed.

Other studies showed that estrogen has the same effect.

"Cholesterol is extremely high in these mice, and the stage is set for them to have severe vascular disease, yet this molecule completely prevents that," said Shaul.

He said the findings strongly suggest that the molecule helps maintain vascular health without adverse impact on cancer risk.

He noted that this approach is likely applicable to both men and women and not limited to older individuals.

The findings are available in an upcoming issue of the Journal of Clinical Investigation.

Hormone Replacement Therapy can be likened to an 'oasis in the desert' for women in the throes of menopause.
Advertisement
Advertisement

Estrogen dominance is a condition with relatively high levels of estrogen and diminished progesterone ...