Elephants Use Vocalization To Coordinate Action 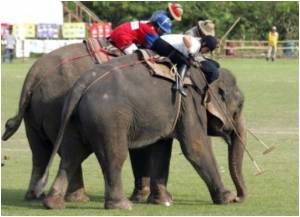 According to a study, elephants use well-coordinated 'conversations' to initiate cooperation within group.

In the wilds of Africa, when it's time for a family of elephants gathered at a watering hole to leave, the matriarch of the group gives the "let' s-go rumble" - as it's referred to in scientific literature - kicking off a coordinated and well-timed conversation, of sorts, between the leaders of the clan.

In a recent study it was found that both elephants and humans rely on the same mechanism to produce sounds.
Advertisement

First, the head honcho moves away from the group, turns her back and gives a long, slightly modulated and - to human ears - soft rumble while steadily flapping her ears. This spurs a series of back and forth vocalizations, or rumbles, within the group before the entire family finally departs.


The use of "rumbles" to initiate departure helps explain the group's ability to work together to achieve more complicated tasks, such as rescue operations to save a calf from drowning.

Elephants Law Being Viewed Skeptically by US Circuses

A proposed law in Congress that would ban using elephants under the big top is being opposed by US circuses.
Advertisement
"These vocalizations facilitate the bonds between the elephants to be able to work together. It's the measure of an organized society. It demonstrates how another social animal grouping organizes itself through vocalizations," said lead author Caitlin O'Connell-Rodwell, PhD, a field biologist and instructor in otolaryngology at the Stanford University School of Medicine.

The study also indicates how this behavior uses rumbles in a structured way to transmit signals longer distances both through the air and through ground vibrations that could alert other elephant family groups not to approach the watering hole until they're gone, thus avoiding the mass chaos of too many large, noisy bodies at the same watering hole at the same time.

"I've seen 200 to 300 elephants at the same watering hole at one time before. There's a lot of vocalization and pushing and shoving and screaming and roaring. You can see why they'd want to avoid that," said O'Connell-Rodwell.

She has studied the elephants of the Mushara area of Etosha National Park in Namibia for 20 years, spending most of her summers hunkered down in a bunker or perched atop a tower cataloging more than 170 identified bulls and more than 15 family groups to understand the importance of long distance communication through both the air and ground.

In this study, O'Connell-Rodwell focuses on sounds. She first noticed this apparent watering hole "departure" conversation years ago while observing the elephants in the wilds. The study occurred between July 1994 and July 1995. Researchers set up scientific observation sites at five watering holes in the Etosha National Park using instrumentation to provide acoustic measurements of the vocalizations and charting behaviors.

They counted the number of vocalizations beginning just as the elephant families arrived at the waterhole up until just after their departure. They found that usually only three of the 15-30 members of the group participated in the "conversations," which fit into the power structure of elephant hierarchies.

"They have a matriarch," O'Connell-Rodwell said. "Then there's this sort of secretary-of-state character, and then you have the general who brings up the rear."

The families consist of the females and the calves. Males over the ages of 12 to 15 leave the herd and form their own groups.

The study confirmed that elephants use vocalization to coordinate action, and that usually three callers are involved in this very coordinated turn-taking conversation.

"It's not just a chorus. As soon as one call ends, another call starts, then the next, then the next. It's connected like a string. Effectively they take a three-second call and turn it into a nine-second call," O'Connell-Rodwell said.

The study was described in a paper published in the October issue of Bioacoustics.

Metabolic rate and body mass do not have any consistent relationship, according to a new study.
Advertisement
<< Employees Find Arrogance as the Worst Quality in a Boss
Supreme Court Asks the Central Government to Provide Detail... >>

Myanmar Training Wild Elephants to Destroy Their Own Habitats

Indian Railways Special Concession on Health Grounds
View all
News Archive
News Resource
Advertisement
News Category
Why Mosquitoes are Attracted to Only Some People? Norovirus, Stomach Viruses can Spread Through Saliva Putting the Brakes on a Bacterium That Cause Digestive Problem Monkeypox May Become a Sexually Transmitted Disease in America This Strain Poses World's Greatest Threat to Human Health
More News
Sign up for Wellness Consult a Doctor Sign up for Selfcare