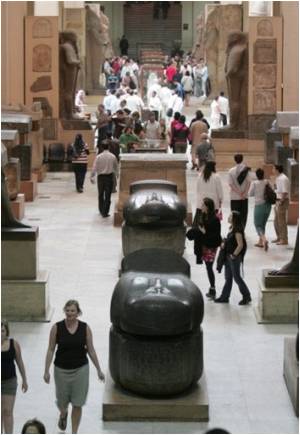 Egypt's tiny Mallawi museum is in ruins as Magdy Tahami looks in disbelief at what remains of it.

The ground is littered with glass from the display cabinets, which once housed its precious collection, after a mob attacked and looted the building, during a nationwide crackdown on Islamist protesters.

Before, hundreds of antiquities, statuettes, gold and jewels told the history of Egypt, from pharaonic times to the Muslim caliphs, from the Omayyad dynasty in the 7th century to the Fatimids in the 12th, and touching on Greek and Roman antiquities.


For 20 years, these historic treasures were assistant-director Tahami's whole life.

"I like this museum more than my own house, I have spent more time there than at home. It is as if it were my house that has been destroyed, burgled and pillaged," he says.
Advertisement
For him and his colleagues, the Mallawi museum, 70 kilometres (43 miles) from Minya, the town in Upper Egypt south of Cairo, has payed a steep price for the bloody crackdown on protests by supporters of ousted Islamist president Mohamed Morsi, toppled by the army on July 3.

On August 14, shortly after the police and army launched an operation on pro-Morsi protest camps in Cairo that killed hundreds in few hours, several hundred armed men attacked the museum.

While nobody is certain who the attackers and looters were, the walls of the museum are still daubed with pro-Morsi slogans.

"Yes to Islam, yes to the Muslim Brotherhood," says one slogan, in a nod to the group from which Morsi hails.

Another warns: "Sisi, we are coming," referring to army chief Abdel Fattah al-Sisi, the strongman who announced Morsi's overthrow on July 3 after massive rallies against the Islamist former head of state.

And the museum, with its antiquities and statues, which a minority of radical Islamists had called to be destroyed, was not the only building to be targeted.

In the region, which is home to a sizeable Christian minority, several churches and Coptic institutions have been also attacked.

Warned in advance of the bloody events in the capital, the employees closed the museum and barricaded themselves inside with a dozen policemen, but they could not stop the damage, Tahami says.

He describes the scene as a "battlefield," with automatic fire echoing from all sides so that "we did not know where they were coming from or who was firing."

After several hours, nearly all of the 1,089 museum pieces had been stolen or destroyed, says Tahami.

UNESCO said the attack had caused "irreversible damage to the history and identity of the Egyptian people" in a country full of archaeological wonders.

"They took everything. The few pieces they left, because they couldn't carry them away, they vandalised," Tahami recalls.

"Here, they burned a mummy," he says, pointing to a black stain on the ground.

Every day, the police says it has recovered more of the stolen antiquities but so far they have only found 221 items.

Fearing some of these treasures may turn up on the black market, UNESCO said the looted objects had been recorded and that selling the items is illegal both inside and outside of Egypt.

The floor of the museum's main display room is still covered with broken glass and wrecked display cases, and a similar scene of devastation can be seen in two adjoining rooms and the one upstairs.

In front of the entrance to the museum, still pocked with bullet holes and surrounded by burned-out cars, Khalil Hussein, the head of security, looks on in silence.

"The day after the attack, an official delegation came to see the damage. When they came, a sniper shot our colleague Sameh Ahmed Abdel Hafiz, who worked at the ticket desk, as he was standing in the courtyard," he says.

During the 2011 uprising that toppled former president Hosni Mubarak, several museums were pillaged, including the Museum of Egyptian Antiquities near Cairo's Tahrir square, epicentre of the demonstrations.

Unrest in Egypt, Boon for Spain
As British, German and French holidaymakers packed its beaches at a time of unrest in Egypt and ......