Edward Smith-The Man Who Has 'Slept' With Over 1000 Cars 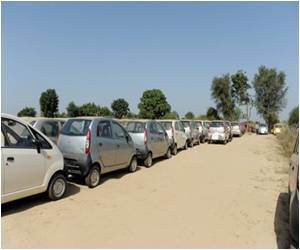 Over the last 45 years Smith has bedded nearly 1,000 lovers, but only one has been a person - the rest have been cars.

The 62-year-old from Yelm, Washington, United States is a mechaphile, which means that he is sexually attracted to cars, the Mirror reported.


He has only slept with one woman, who he had a one-night stand with, but it didn't have much impact on him.

Smith was first attracted to machines in his teens, where he went on to bonk hundreds of vehicles and was having sex with one a week at his peak.

His usual conquests include Mustangs, luxury Jaguars and even attack helicopters.

Now he claims of being committed with his long-term lover, 'Vanilla', a second-hand Volkswagen Beetle he bought 30 years ago, who he says is "the one".

Researchers Developing Talking Cars That Could Ease Traffic Congestion
Researchers are trying to develop a transportation system where vehicles communicate directly with ....

EU Wants Automatic Emergency Dial-Up Facility in Passenger Cars by 2015
The European Union has asked car makers in the region to ensure that all new passenger cars are ......