Eating When You Should Be Sleeping Increases Risk of Heart Disease 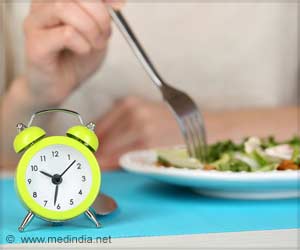 Eating during the night when we are actually supposed to sleep, increases lipid levels in the body and the risk of heart disease and diabetes.

The body's 24-hour cycle is to blame, finds a study done at the National Autonomous University of Mexico.

Advertisement
‘When we eat at times when we should sleep, it puts the body at risk of heart disease and diabetes.’

The study, done in mice looked at levels of fat, called triglycerides, in the rats' blood. They found that after feeding the rats fat at the beginning of their rest period, their blood fat levels spiked more drastically than when fed during the beginning of their active phase. When they removed the part of the rat's brain that controls the 24-hour cycle, there was no longer a change in fat levels.


High blood fat levels are associated with heart disease and diabetes. These diseases are associated with a lifestyle where humans ignore the signals of the biological clock, and eat in the evening and night. This study demonstrates why such a lifestyle out of sync with our 24-hour cycle may result in high blood fat levels and thus in a higher risk for heart problems.
Advertisement
Suprachiasmatic nucleus or nuclei (SCN) is a tiny region of the brain in the hypothalamus, situated directly above the optic chiasm. It is responsible for controlling circadian rhythms. SCN has a major role in day-night variations in plasma TGs by promoting TG uptake into skeletal muscle and brown adipose tissue.

Commenting on the study, author Ruud Buijs said, "The fact that we can ignore our biological clock is important for survival; we can decide to sleep during the day when we are extremely tired or we run away from danger at night. However, doing this frequently - with shift work, jet lag, or staying up late at night - will harm our health in the long-term especially when we eat at times when we should sleep."

Dyslipidemia
Dyslipidemia is a condition due to imbalance of fats in blood. Find out more about dyslipidemia, ......

Hypertriglyceridemia
Triglycerides are a form of the fat, the major energy source found in our blood. High triglyceride ....