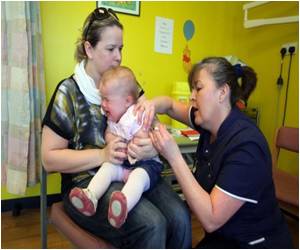 Children receiving measles-containing vaccines at 12-15 months of age have a lower risk of fever and seizures than those who receive them at 16-23 months of age.

This is according to a new Kaiser Permanente study published in JAMA Pediatrics. The Centers for Disease Control and Prevention recommends a two-dose series of measles-containing vaccines, with the first dose administered at 12-15 months and the second dose at 4-6 years of age. Most children receive their first dose of a measles-containing vaccine between the ages of 12 and 23 months; approximately 85 percent of children receive it by 19 months of age. The study found that receiving the first dose by 15 months provides a benefit to children.

"We found that the magnitude of increased risk of fever and seizures following immunization with measles-containing vaccines during the second year of life depends on age," said Ali Rowhani-Rahbar, MD, MPH, PhD, lead author of the study. "While measles-containing vaccines administered at 12-15 months of age are associated with a small risk of fever and seizures following immunization, delayed administration at 16-23 months of age results in a greater risk of those adverse events."


Previous studies have shown that these vaccines administered to children 12-23 months of age are associated with an increased risk of febrile seizures one to two weeks following immunization. This is the period of time during which the vaccine virus replication is at its peak, potentially causing fever. The resulting fever may cause some children to experience a seizure.
Advertisement
"Kaiser Permanente's guidelines for measles-containing vaccines are in line with the CDC's recommendations," said Matthew F. Daley, MD, a pediatrician and senior investigator at Kaiser Permanente Colorado's Institute for Health Research. "This study's findings reinforce for parents that these vaccines are safer when children receive them at 12 to 15 months of age."

Using data from the Vaccine Safety Datalink, a collaborative effort of the Centers for Disease Control and Prevention and nine managed care organizations, Kaiser Permanente researchers evaluated the potential modifying effect of age on the risk of fever and seizures following immunization with different combinations of vaccines: 1) any measles-containing vaccines; and 2) the measles, mumps, rubella and varicella vaccine (MMRV) compared with the measles, mumps and rubella vaccine (MMR) administered with or without a separate varicella vaccine (MMR+V). Researchers evaluated the records of 840,348 children 12-23 months of age who had received a measles-containing vaccine between January 2001 and December 2011.

Kaiser Permanente operates the largest private patient-centered electronically enabled health system in the world, which allows it to deliver excellent care and conduct transformational health research. The organization's electronic health record system, Kaiser Permanente HealthConnect®, securely connects 9.1 million patients to 1,700 physicians in 611 medical offices and 37 hospitals. Kaiser Permanente's research scientists are able to conduct studies using these clinically rich, longitudinal data sources in order to shape the future of health and care delivery for Kaiser Permanente's members, the communities in which it operates, the nation, and the world.

Nigeria: 40 Kids Die of Measles
In Nigeria, 40 children have died in a fresh outbreak of measles, say authorities....

Health Ministers All Set to Fight Measles
Measles may be finally eradicated thanks to the health ministers from Southeast Asian countries, ......

Texas Health Authorities Issue Measles Alert
Health officials in the US state of Texas have issued a measles alert, due to a rapid increase in .....