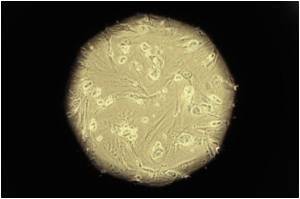 The approach kills tumor cells in both mouse models of glioblastoma and human glioblastoma cells. Glioblastomas are the most common and aggressive form of malignant brain cancer, affecting roughly 6 out of every 100,000 people. There is currently no effective treatment for glioblastoma, and patients rarely survive more than a year after diagnosis.


"We found that a low dose of Gamitrinib makes cancer cells susceptible to TRAIL, bypassing many of the mechanisms tumors use to survive," said senior author Dario Altieri, M.D., the Robert and Penny Fox Distinguished Professor at Wistar and director of The Wistar Institute Cancer Center. "Here we have found a new way to combine cancer therapies, one that could be applied to treating many types of cancer because both of these drugs target different mechanisms of tumor cell survival that revolve around mitochondria."

Mitochondria is the Main Force Responsible for Cell Division

A study on yeast cells has found that mitochondria, the fuel of a cell, is the "driver" for cell division.
Advertisement
The findings have been published in the April issue of the Journal for Clinical Investigation.

As commonly depicted in high school biology texts, mitochondria are the "powerhouses" of the cells, organelles whose main function is to turn sugar into useable energy. What is less commonly known is the role of mitochondria in programmed cell death, or apoptosis, the self-destruct system hardwired into every cell. Apoptosis evolved, in part, as a way for the body to react to extreme stress, a means to sacrifice damaged cells for the greater good of the organism. Cancer cells rely on the mitochondria to provide the energy rapidly-growing tumors need to survive, but find ways to block the signaling pathways that trigger apoptosis. Many researchers, including Altieri, have looked for ways to force tumor cells to hit this self-destruct switch.

Gamitrinib is a chemical inhibitor first developed by Altieri and his colleagues in 2009 at the University of Massachusetts. The drug binds to and inhibits Hsp90  Heat Shock Protein-90  a so-called chaperone protein that is highly active in mitochondria and other cellular organelles where it helps regulate and "rescue" other proteins, particularly in times of stress. Their previous studies have shown that Gamitrinib is effective in damaging tumor cell mitochondria, which can lead to cell death.

"When tumor cells are confronted with lower concentrations of Gamitrinib, they mount a stress-related defensive system, essentially eating damaged mitochondria and altering how genes are turned on and off to compensate for induced defects in the mitochondria," Altieri said. "This process naturally suppresses Nuclear Factor-kappa Beta, a protein that prevents apoptosis from happening. Ironically, it's this very defensive measure that we can exploit in killing tumor cells."

Nuclear Factor-kappa Beta (NF-êÂ) broadly promotes survival in tumors by halting the processes that lead to apoptosis. Altieri and his colleagues wanted to see if the suppression of NF-êÂ would provide an opportunity for TRAIL, a small engineered molecule that mimics the signals used to induce apoptosis.

In their experiments, researchers confirmed previous studies that showed how TRAIL alone did not affect glioblastoma in cell and animal models of the disease. TRAIL plus Gamitrinib, however, stimulated damage to mitochondria in tumor cells, which started a cascading series of reactions, culminating in cell death. Preclinical experiments conducted in mouse models of glioblastoma demonstrated that the combination did not cause any detectable toxic side effects.

According to Altieri, the fact that Gamitrinib and TRAIL are in clinical development already may help speed the process that could see eventual clinical trials of the two drugs together. "There is much preclinical work to be done, of course, but we are very interested in laying the groundwork now toward initial clinical trials," said Altieri.

Going forward, the researchers also plan to delve deeper into the cellular processes at work.

"I find the basic biology of this system fascinating, since here we show how mitochondria, which are the only organelles that have their own DNA, must communicate with the DNA in the cell's nucleus," Altieri said. "It is not a well-understood process by any means."

Diaphragmatic Hernia Daily Calorie Requirements Noscaphene (Noscapine) Color Blindness Calculator Drug Interaction Checker A-Z Drug Brands in India Find a Hospital Drug Side Effects Calculator Post-Nasal Drip Blood Donation - Recipients
This site uses cookies to deliver our services.By using our site, you acknowledge that you have read and understand our Cookie Policy, Privacy Policy, and our Terms of Use  Ok, Got it. Close
×