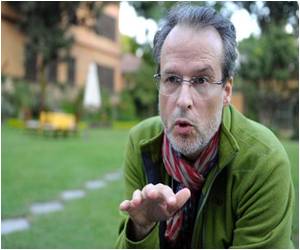 A French multiple sclerosis sufferer became the first disabled person to skydive over Mount Everest. He successfully completed his landing before being taken to hospital as a precaution.

"I feel very happy. I am exhausted but very happy," Marc Kopp said from a hospital bed in Kathmandu where doctors examined him for any injuries sustained during the jump.

The 55-year-old Kopp, who lives in Longwy northeast of Paris, has suffered for more than a decade from multiple sclerosis, the degenerative disease of the nervous system which disrupts the brain's ability to communicate with the body.


Muscles weaken, lesions emerge on the brain and spinal cord and in the worst cases, patients can lose the ability to speak or walk.

The tandem skydive saw Kopp jump out of a helicopter hovering 10,000 metres (32,800 feet) above the mountain, accompanied by his friend, champion skydiver Mario Gervasi.
Advertisement
"I hope my action will inspire others living with this illness. I hope many more will follow in my footsteps," Kopp told AFP.

He said preparation for the jump was "very painful" and left his whole body hurting.

Although he usually uses a wheelchair, the trek through the Himalayas meant he had to spend several hours a day riding a horse, which was hard on his spine, to reach the airstrip for the jump.

"There were many times in the last few days when I thought I wouldn't be able to realise my dream," he said.

After completing the jump Sunday morning, he returned to Kathmandu by helicopter, where doctors advised him to rest for a day.

Kopp was diagnosed in 2001 with primary progressive multiple sclerosis, a form of the disease with almost no prospect of remission.

He currently volunteers and runs a support group for fellow sufferers.

Source: AFP
Advertisement
<< Researchers Explain Why Every Human Face is Unique Like A F...
Children Heavily Affected By Mum's Anxiety and Depression >>

Climate Change to be Studied With Help of Mount Everest Ice Cores
An expedition leader has said that Chinese scientists have obtained three ice cores from Mount ......