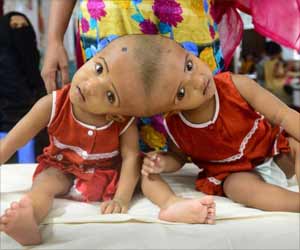 Hungarian surgeons with the Action for Defenceless People Foundation (ADPF) medical aid charity performed a series of rare and unique surgeries to separate Bangladeshi twins conjoined at the head.

The twins named Rabeya and Rukaya came from a family residing in Pabna, 120 kilometers (75 miles) west of Dhaka. The family approached ADPF for help in 2017.

Advertisement
‘The Hungarian team of doctors operated Bangladeshi twins born conjoined at the head. The twins were separated by a marathon 30-hour surgery to separate skulls and brains.’
Read More..

The ADPF, a Hungarian charity, was started in 2002 by Surgeon Csokay, and plastic surgeon, Gergely Pataki to provide free surgery to people who could not afford in Hungary and abroad. ADPF has conducted more than 500 reconstructive surgery operations in Asia and Africa, including the Rohingya Muslim refugees in Bangladesh.


The Bangladeshi twins suffered from a rare embryological disorder affecting an estimated one in every five to six million births. Surgeons had given only 50 percent chance of both the twins surviving, prior to the surgery. This is because, according to ADPF, only a handful of twins conjoined in the head could be separated successfully.
Advertisement
Initially, the skulls and brains of the twins were separated at Dhaka's Combined Military Hospital. The shared blood vessels of the twins' brains were separated in a 14-hour operation.

Subsequent to this, the team covered the wound areas with soft tissues generated by a tissue expansion process. For this second six-month-long phase the twins moved to Budapest, Hungary. The doctors inserted a Hungarian-designed implant system to expand the scalp and soft tissues in their heads. During the six-month-long period, 40 plastic surgical interventions were done. This involved filling up of expanders, bandage change, laser treatment to regenerate wound. Ingenious virtual 3D animation software was used to map the two brains.

Plastic surgeon, Pataki considered this as one of the toughest malformations he has ever seen.

The twins returned to Dhaka, stable after the final separation.

Intrauterine Environment Might Contribute to Physical Differences in Twins
Recent studies show that changes in this environment could be responsible for physical differences ....

Dogs Can Tell Identical Twins Apart by Smell
Identical twins have their own individual smells, even if they live in the same house and eat the .....