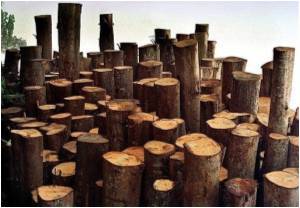 Mahouts and elephant owners say the profitable business which involved pachyderms carrying and loading wooden logs does not find much work anymore and dwindling of forests is leading to severe food crisis in the wild and even the elephant owners have difficulty making both ends meet.

A new study has claimed that feeding a growing global population while also slowing or reversing global deforestation can only happen if agricultural yields rise and/or per capita food consumption goes down over the next century.
Advertisement

"Now keeping elephants is becoming tougher for the owners as there is very little food left for the animals in the forest. Elephants mainly feed on banana trees and are engaged in carrying logs but since we cannot work in the forests without permit, we do not have much work," said an elephant owner, Mohammed Abdul on Sunday.


The owners are also worried about the future of elephants as they are not able to generate enough income out of once lucrative business. They do not have any other source of income to take care of their families and these giant land mammals.
Advertisement
"We are facing tough times as we do not have much work left for the elephants and there is food crisis for elephants. There is no food in the forest. Moreover, most of the area has turned into reserve forest. We have very less work; if there is work for one month, we are idle for next two months," said a mahout, Sattar Hussan.

There is not enough food for the jumbos in the forests as they have been turned into a reserve.

As per the census conducted by State Board for Wildlife, the population of elephants increased in Tripura from 38 to 59 in 2002.

The government has decided to set up a reserve for the jumbos before they disappear on account of large scale poaching or migration. (ANI)