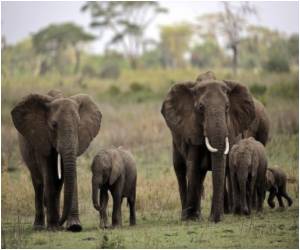 Large wildlife Populations are declining around the world, while zoonotic diseases (those transmitted from animals to humans) are on the rise.

A team of Smithsonian scientists and colleagues have discovered a possible link between the two. They found that in East Africa, the loss of large wildlife directly correlated with a significant increase in rodents, which often carry disease-causing bacteria dangerous to humans. The team's research is published in the Proceedings of the National Academy of Sciences, April 28.
Advertisement

"Our study shows us that ecosystem health, wildlife health and human health are all related," said Kristofer Helgen, curator of mammals at the Smithsonian's National Museum of Natural History and co-author of the research.


Large animals, such as elephants, giraffes, antelope and zebras, have a profound influence on their ecosystems by feeding on vast amounts of vegetation and compacting and disturbing soil. As populations of these large species decline, the ecosystems they once dominated change in many ways. The team's main question was whether the loss of large wildlife influences the risk of people contracting diseases spread by rodentsa pressing question, as more than 60 percent of infectious human diseases are zoonotic.

Africa's Oldest Wildlife Reserve Threatened by Quest for Oil
Africa's most venerable wildlife reserve, located in the Democratic Republic of Congo, is being ......

Pesticide Poisoning of Africa's Wildlife Examined
The silent, effective and cheap poisons that are dangerously used in Africa as pesticides and ......