Dancers Strip Off Almost All as the US Burlesque Takes Off 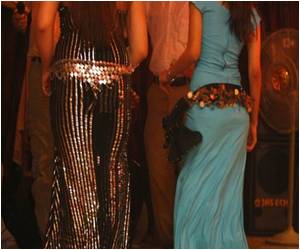 Amanda, assuming her saucy alter ego, gets on stage and strips off her clothes as part of the growing US burlesque movement though by day she is an accountant.

It's an art, performers say, that lies at the intersection between intellect and flesh.

To oppose lawmaker's decision to approve a ban on nudity in public protestors in San Francisco have stripped off.
Advertisement

"Getting naked in front of people has given me the confidence that I never had," said Amanda, 28, before going on stage at the Black Cat, a concert hall in Washington that sometimes hosts burlesque shows.


"My family is absolutely not ok with it," quipped the young performer.

"My parents are very staunch Republicans; they're very close-minded people," she said.

A proposal to outlaw most public nudity will be voted upon by lawmakers in San Fransisco on Tuesday.
Advertisement
On stage Amanda is light years away from the southern town where she lives. As "Ellie Quinn" she arrives on stage squeezed into a dress that highlights her voluptuous curves and wearing a stylized blond wig.

But her performance aims at more than just a saucy striptease. As "Ellie Quinn" strips defiantly against a backdrop of bad music, a message written across her back is revealed. "One size doesn't fit all," it says.

Throwing her wig on the ground, she again becomes Amanda, a woman who wears glasses -- and -- according to her back -- is fundamentally opposed to the beauty standards imposed by fashion magazines.

In burlesque, artists cover their nipples with tassels and leave their thong underwear on. And many performers are performing only as a side hobby, not as a day job.

"We have this joke where, unlike a burlesque artist, a stripper actually makes enough money to pay the rent," said Danielle who goes by the stage name "Gigi Halliday".

The cabaret aspect of burlesque is first and foremost, performers and producers said, arguing that total nudity is not the objective.

Since it began, burlesque was intended as "a parody: it was telling a story, it was the theatrical part of strip tease. And that's what it still is," said Melina Afzal, who produces burlesque shows in Washington.

Humor and provocation are critical aspects, she said.

"People are not comfortable with nudity in America, but they are intrigued. They want to see it, but they don't really know what to do with it. For us it's very empowering," said Asha, known as "Cherokee Rose".

Burlesque had its heyday at the beginning of the 20th century, survived Prohibition, and went out of fashion in the 1960s.

Its strong renaissance a dozen or so years ago was spurred by the movies "Moulin Rouge" in 2001 and "Burlesque" in 2010 starring Cher and Christina Aguilera.

In Washington, alone, more than a half dozen venues offer burlesque shows.

"We are running into saturation problems at least on the East Coast -- too many shows, too many producers," said Afzal.

Its popularity is owed without a doubt to its "safe and sexy" air, she says. "It's non-judgmental."

At the Black Cat, the audience is all smiles and appreciative whistles as soon as a bra hits the floor.

But Clark, a forty-something who came with his companion Sheryl, said he wasn't only there to see dancers take off their clothes.

"I am Canadian, so I know Americans don't strip off" all their clothes, he joked.

"It's art! Yes, it's artistic" Sheryl said with a laugh.

Research has shown that the human brain reacts to a naked body within 0.2 seconds.
Advertisement
<< Cervical Cancer Rates in the US Higher Than Previously Note...
Depression Ups Heart Disease Risk >>