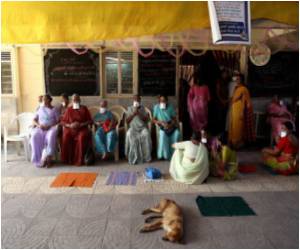 A study shows that cycles of prolonged fasting not only protect against immune system damage but also induce immune system regeneration, shifting stem cells from a dormant state to a state of self-renewal.

It is the first evidence of a natural intervention triggering stem cell-based regeneration of an organ or system. Immune system damage is a major side effect of chemotherapy. The study got published in the June 5 issue of the Cell Press journal Cell Stem Cell.

In both mice and a Phase 1 human clinical trial, long periods of not eating significantly lowered white blood cell counts. In mice, fasting cycles then "flipped a regenerative switch": changing the signaling pathways for hematopoietic stem cells, which are responsible for the generation of blood and immune systems, the research showed.


The study has major implications for healthier aging, in which immune system decline contributes to increased susceptibility to disease as we age. By outlining how prolonged fasting cycles  periods of no food for two to four days at a time over the course of six months  kill older and damaged immune cells and generate new ones, the research also has implications for chemotherapy tolerance and for those with a wide range of immune system deficiencies, including autoimmunity disorders.

Well-off German patients in Europe's top economy are increasingly deciding less is more and fasting to cure what ails them. They flock to clinics that force them to fast for better health.
Advertisement
"We could not predict that prolonged fasting would have such a remarkable effect in promoting stem cell-based regeneration of the hematopoietic system," said corresponding author Valter Longo, the Edna M. Jones Professor of Gerontology and the Biological Sciences at the USC Davis School of Gerontology, and director of the USC Longevity Institute.

"When you starve, the system tries to save energy, and one of the things it can do to save energy is to recycle a lot of the immune cells that are not needed, especially those that may be damaged," Longo said. "What we started noticing in both our human work and animal work is that the white blood cell count goes down with prolonged fasting. Then when you re-feed, the blood cells come back. So we started thinking, well, where does it come from?"

Prolonged fasting forces the body to use stores of glucose, fat and ketones, but also breaks down a significant portion of white blood cells. Longo likens the effect to lightening a plane of excess cargo.

During each cycle of fasting, this depletion of white blood cells induces changes that trigger stem cell-based regeneration of new immune system cells. In particular, prolonged fasting reduced the enzyme PKA, an effect previously discovered by the Longo team to extend longevity in simple organisms and which has been linked in other research to the regulation of stem cell self-renewal and pluripotency  that is, the potential for one cell to develop into many different cell types. Prolonged fasting also lowered levels of IGF-1, a growth-factor hormone that Longo and others have linked to aging, tumor progression and cancer risk.

"PKA is the key gene that needs to shut down in order for these stem cells to switch into regenerative mode. It gives the 'okay' for stem cells to go ahead and begin proliferating and rebuild the entire system," explained Longo, noting the potential of clinical applications that mimic the effects of prolonged fasting to rejuvenate the immune system. "And the good news is that the body got rid of the parts of the system that might be damaged or old, the inefficient parts, during the fasting. Now, if you start with a system heavily damaged by chemotherapy or aging, fasting cycles can generate, literally, a new immune system."

Prolonged fasting also protected against toxicity in a pilot clinical trial in which a small group of patients fasted for a 72-hour period prior to chemotherapy, extending Longo's influential past research: "While chemotherapy saves lives, it causes significant collateral damage to the immune system. The results of this study suggest that fasting may mitigate some of the harmful effects of chemotherapy," said co-author Tanya Dorff, assistant professor of clinical medicine at the USC Norris Comprehensive Cancer Center and Hospital. "More clinical studies are needed, and any such dietary intervention should be undertaken only under the guidance of a physician."

"We are investigating the possibility that these effects are applicable to many different systems and organs, not just the immune system," said Longo, whose lab is in the process of conducting further research on controlled dietary interventions and stem cell regeneration in both animal and clinical studies.

Stay Fit While Fasting and Feasting

Find a Doctor The Essence of Yoga Diaphragmatic Hernia Noscaphene (Noscapine) Blood Pressure Calculator Indian Medical Journals Find a Hospital Nutam (400mg) (Piracetam) How to Reduce School Bag Weight - Simple Tips Drug Side Effects Calculator
This site uses cookies to deliver our services. By using our site, you acknowledge that you have read and understand our Cookie Policy, Privacy Policy, and our Terms of Use