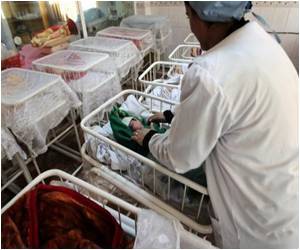 In Cuba, the drug Surfacen reduced infant mortality due to respiratory distress syndrome in newborns to 0.2 per thousand live births in 2012.

In 1994, the mortality was 0.8 per thousand live births, according to a Cuban newspaper article, Prensa Latina reported.

Developed by specialists of the National Centre for Agricultural Health, the drug addresses the deficiency of pulmonary endogenous surfactant that is critical to maintaining lung inflation and promotes respiration, said Elaine Diaz, head of the research team.


Respiratory distress syndrome often occurs in premature infants and is usually a major cause of their deaths.

Using Surfacen decreases the requirement of artificial ventilation and encourages rapid improvement of the oxygen level in the blood, the doctor said.
Advertisement
The product obtained sanitary registration in 1995 and used in all neonatal intensive care units of the country as a part of maternal and child care programme of the ministry of public health.

In addition to saving the lives of many Cuban children, this drug also has a significant economic impact as it reduced imports of such medicines.

The product received a gold medal from the World Intellectual Property Organisation in 2007. It also won the annual health prize for technological innovation in 2006.

Having Kids Early and Fast Major Cause of Infant Mortality in India, Nepal, Say Researchers
Having children early and in rapid succession are major factors fueling high infant mortality rates ...

Indiana is 47th in the Infant Mortality Rate
The Governor feels the state can handle its health care issues and the federal government has given ...

Cardboard Boxes Have Helped Finland Reduce Infant Mortality Rates
A tradition that started in the 1930s may have helped Finland achieve one of the lowest infant ......

Higher Child Marriage Rates Associated With Higher Maternal and Infant Mortality: Researchers
Researchers report that countries in which girls are commonly married before the age of 18 have ......

Psychological Defence Mechanisms
Defense mechanisms help with the coping strategy of the human mind to reduce stress and anxiety caus...