Cracking the Durian Genome Tells Us Why the Fruit Stinks 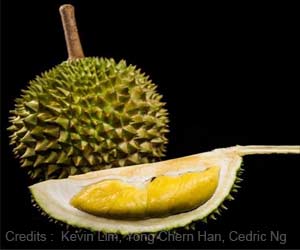 Durian is known as the "king of fruits" in Asia is a prized tropical fruit delicacy and the complete genetic map of durian has been unraveled for the very first time by Singapore scientists.

The Singapore team's efforts were driven by both innate scientific curiosity and a love of the fruit, and funded by private donations from anonymous durian devotees.


"Being a geneticist, I was naturally curious about the Durian genome- what gene causes its pungent smell? How did its spiny husk arise?" said study co-lead author Professor Teh Bin Tean, a durian lover and currently the Deputy Director of the National Cancer Centre Singapore.
Advertisement
Using state-of-the-art sequencing platforms, the team mapped the genome of a particular durian variety called Musang King ("Mao Shan Wang" in Chinese), known for its exceptionally delicate texture and potent aroma and considered as the King of Kings in the local durian world.

The team's analysis revealed that the durian genome comprises approximately 46,000 genes, almost double that in humans who have about 23,000 genes. Based on the newly generated genomic data, the team also studied the evolution of durian and traced its relationship 65 million years back to the cacao plant which produces chocolate.

"Our analysis revealed that VSC production is turbocharged in durian fruits, which fits with many people's opinions that durian smell has a 'sulphury' aspect'," said co-lead author Professor Patrick Tan from Duke-NUS Medical School.

The team speculates that in the wild, the ability of durians to produce high VSC levels and a pungent smell may be important in attracting animals to eat and disperse durian seeds to other regions.

The technological expertise developed by the team may also be applied to other plants, including those that may be of medicinal value.

Professor Soo Khee Chee, Director of the National Cancer Centre Singapore explained: "There is a long and distinguished history of medicines being discovered from plants. The best example is Taxol, the well-known drug used for treating breast cancer, and it is originally derived from the bark of the Pacific yew!"

The team notes that besides the specific durian species (Durio zibethenus) sequenced in this study, there are over 25 other durian species in nature, some are edible and some are not.

"Many of these other durian species are in this part of the world and sadly some are endangered due to the increasing loss of biodiversity. DNA sequencing is thus an important tool to protect the precious information contained in these fascinating and important plants," said Prof Teh.

Published in the prestigious journal Nature Genetics, the team has donated the Durian genome data to the National Parks Board, where they hope it will spur further durian research and education in Singapore and the region.

The team also looks forward to working with the National Parks Board's botanists to study other plants, especially those endangered in the region due to increasing deforestation and industrialization.

More News on:
Why Do We Eat - Nutrition Facts Diet Lifestyle and Heart Disease The Acid-Alkaline balance, Diet and Health Acid Base Dietary Balance and its Influence on Our Health and Wellbeing Nails - Health and Disease Fruits to Help Lower Blood Pressure Health benefits of bananas Fruitarian Diet Papaya Brand-Food Rules for the New Year

Health Benefits of Durian
Reviled for its odor but consumed for its taste, durian has plenty of health benefits, which is why ...