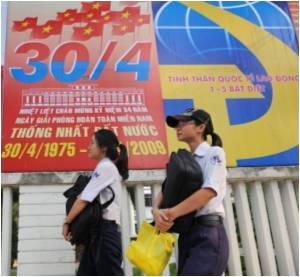 Tran Huy Hoang stares in shock at the images of four Vietnamese teenagers slapping and kicking a girl whose hands try to shield the blows.

"How could schoolgirls act so much like gangsters?" asks Hoang, the father of a 14-year-old girl, as he watches the video clip -- apparently filmed by another teenager -- posted on the YouTube website.

A Vietnamese bank is offering its customers a large can of beer as a reward for depositing money.
Advertisement

The girls pulled off their victim's T-shirt and bra, leaving her half-naked.


It was one of several clips showing violence among Vietnamese youth that have circulated on the Internet over the past year, sparking concern about the media's role and a breakdown of family-centred social values in the rapidly modernising society.

While most find it a little unnerving when someone else probes their ears, in Vietnam, where ear picking is considered to be an art, many find it to be as good as sex.
Advertisement
"The traditional values are vanishing while new values are not enough to replace them," said education expert Pham Toan, 80.

Sociologists say there is no data to capture trends in the violence but it appears to be increasing as social mores change, although the problem is not confined to Vietnam.

"We have to accept the fact that youth violence seems to become more popular," said Hoang Ba Thinh, a professor of social work at Vietnam National University.

Influenced by Confucian values, Vietnam's young people traditionally had respect for teachers, parents and the elderly. Rich and poor alike were taught the value of labour rather than of money itself, said Toan.

"If a piece of rice fell from the bowl to the floor, the elderly in the family would remind them that a grain of rice was a seed of gold," he said.

Parents now have less time for the family as they pursue material wealth, he said.

"In the society now, people only pay attention to earning money and spending it rampantly," said Toan.

Now, even though traditional moral principles are taught at school, those virtues are not reinforced at home because parents are focused more on improving their lifestyle, and this leaves youngsters confused, he added.

After years of poverty following the country's reunification in 1975 at the end of the Vietnam War, communist Vietnam in 1986 began to embrace the free market under economic reforms known as "doi moi".

The move eventually led to a growth rate among the highest in Asia, and a per capita income that is now about 1,200 dollars.

During wartime and the period of economic hardship that followed, "people were more humane, more passionate and ready to share with each other both sweetness and bitterness," said Trinh Hoa Binh, from the Institute of Sociology.

People are now so burdened with worries over covering their cost of living, "just a minor car accident or a bad glance can easily result in violence," he said.

While foreigners still see Vietnam as one of the safest countries in Asia, locals are increasingly concerned. Youth violence became a hot topic in online news sites over the past year in Vietnam, where nearly 20 percent of the 86 million people are between 15 and 24 years old.

In one of the more serious cases, a 15-year-old boy in southern Dalat city was stabbed to death by two other grade nine students, VNExpress news site reported. The motive for the killing was unclear.

There were nearly 1,600 cases of violence in and outside schools in the 2009-2010 academic year, according to Ministry of Education and Training figures cited by Lao Dong newspaper.

More than 2,400 students had been reprimanded for their acts while hundreds were temporarily suspended from school, it said.

The unrest stemmed from the students' lack of "life skills, self-restraint and appropriate behaviour to solve minor and simple quarrels" the report said, citing the ministry.

Along with weaker parental supervision, young people are subjected to "rampant violent images" in the mass media, online games and films, Binh said.

"I think we are now living in an irresponsible society, with people tending to stay away from community and public activities," he said.

The main social organisations -- such as those for youth and women -- are linked to the state, with few independent non-governmental groups.

"I give her my best care, teaching her right from wrong, sending her to a good school with well-behaved students," the office worker said while waiting for her daughter outside a public school in Hanoi.

But just in case of trouble, Mai said she still sends her 11-year-old girl to karate classes -- "not to attack others, but to know how to defend herself".

Former US Base in Vietnam to Go Through Agent Orange Cleanup

Contamination from Agent Orange at a former wartime US base in Vietnam will go through a massive clean-up process middle of next year, announced the US embassy.
Advertisement
Advertisement
This site uses cookies to deliver our services.By using our site, you acknowledge that you have read and understand our Cookie Policy, Privacy Policy, and our Terms of Use  Ok, Got it. Close
×