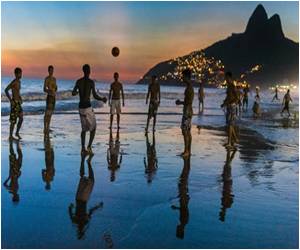 Columbia's comfortable victory in their opening World Cup match has raised the spirits of people back home just a day before voters choose their next president in a runoff.

After being sidelined from the event for 16 years, Colombia overcame the absence of injured striker Radamel Falcao and scored a decisive 3-0 win against Greece in their first Group C match.

Supporters might need to be forgiven for momentarily forgetting their need to pick a new leader Sunday between center-right President Juan Manuel Santos and more conservative Oscar Ivan Zuluaga.


"Let's go, Colombia. We've got our team, we've got a way to win, we started things off at the World Cup on the right foot... and tomorrow, peace is going to be the winner," said an emotional Santos, 62.
Advertisement
The president backs efforts under way to iron out a peace deal to end the government's more than five decades of conflict against the Revolutionary Armed Forces of Colombia.

Zuluaga, decked out in the national team's yellow jersey, also saw the game with family, friends and ex-president Alvaro Uribe (2002-2010), his political mentor.

"This win for Colombia has moved us; and tomorrow, we need to wrap things up by winning the presidency," a jubilant Zuluaga said, arms raised high.

On the streets of many Colombian cities, the passion was all futbol frenzy -- no politics. And the level of passion looked a lot more like a final than for an opening match.

More than 32 million Colombians are eligible to vote Sunday.

Polls show the race is close and analysts are stressing the need to boost turnout. Almost 60 percent of voters did not cast ballots in the first round.

Worlds First Transgender Footballer Wants to Remain in the Game After Retirement
While the world's first transgender professional football player, Jaiyah Saelua, revealed that she ....