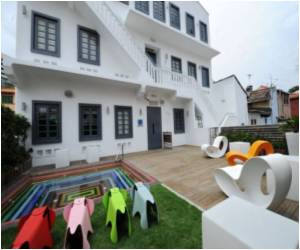 With foreigners seeking plastic surgery in a city that's become a magnet for the procedure, Alba Diaz runs a very unique hotel.

Working in a posh neighborhood of Cali, Colombia's third largest city, the 55-year-old Diaz pampers her clients, from the time they get off the plane throughout their stay at her clinic.

She looks over them during their post-surgical convalescence, treating them to special diets and massages. A bilingual nurse who speaks English helps out.


"The most important thing is love, affection. We are here to give a little of it to people who need it while they have left their family, their husband, their children, who are also suffering for them on the other side of the world," she told AFP. Many patients get depressed after surgery, she says.

A novel plastic surgery method for Latin America was presented by a subsidiary of Nicaraguan conglomerate Grupo Pellas.
Advertisement
Her calling started off in a personal way. Her daughter, living in the United States, came home for a tummy tuck with liposuction. Mom's tender loving care prompted her to suggest Diaz open up the beauty-oriented hotel.

Business is good because Colombia has a tradition as being a good place for plastic surgery. It is the third busiest in the sector in Latin America, after Brazil and Mexico, and ranked 11th in the world.

Every year more than 200,000 plastic surgery operations are carried out in Colombia, or 3.3 percent of the world total, according to the International Society of Aesthetic Plastic Surgery (ISAPS).

One client, a Spanish male nurse aged 39 who asked not to be named, also came for abdominal surgery. He was prompted to do so by a female Colombian friend who talked up Cali. Besides the affordable price, he said, "it is the quality that counts."

For Miriam Alvarado, a 53-year-old from Puerto Rico, the decision to undergo surgery in Colombia came after her sister and sister-in-law went under the knife here.

In a matter of two weeks, it was all set: the trip and the operation -- one on her chin, and liposuction.

And the medical facilities seem better to her. "In Puerto Rico there are all kinds of surgeons but the post-op treatment is not as advanced as it is here," Alvarado said.

Another convert is Peter McCabe, a US businessman who lives in Colombia. He had work done on his face, despite warnings from his family not to go through with it.

They said "if you are going to do it, please do it at home," he said.

But after they saw his new face on Skype, many changed their minds and some plan to jump on a plane to Colombia for a bit of tweaking of their own.

But all this is not without risk.

Between three and five percent of patients are not satisfied with the results of their surgery, and that figure jumps to 12 percent for nose work, said Lina Triana, a surgeon in Cali and secretary of ISAPS. She says there are non-qualified people out there offering operations.

But the good ones are in fact really good, she insisted.

"Now it is our colleagues in Europe and the United States who must learn here how to sculpt beautiful bodies," Triana said.

Technological innovation is one of the strong suits of Colombian doctors, who hold a convention every year to show off their techniques.

For instance, Alfonso Riascos unveiled a special method for carrying out a "facial rejuvenation" without leaving telltale scars near the ears, as is often the case.

"I began more or less five years ago with selected patients and now I have 400," he said proudly. A third are foreigners. His trademark is a small and discreet five-centimeter (two-inch) scar on the scalp.

Hotel owner Alba does not expect business to slow down any time soon.

"We have had family groups, with the father, the mother and three children. One of the daughters brought her husband. They love to have company," Diaz said.