Cold Water Immersion May Not Benefit Active Recovery in Athletes 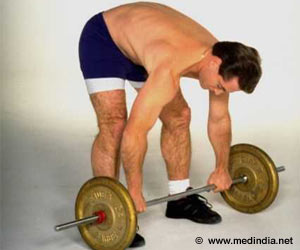 Contrary to popular belief, cold water immersion does not significantly reduce inflammation in muscles after resistance exercise. This is according to a study by Dr. Jonathan Peake and colleagues published in The Journal of Physiology.

Cold water immersion reduces muscle temperature and blood flow, and this was thought to enhance repair of muscles damaged by exercise, by reducing inflammation. However, there had not been any data--at least in humans-- to back this up, and Dr Peake's new research has called this benefit into question.

Exercise is about revamping your lifestyle, not just weight loss. Exercise to get healthy - that way, you'll last longer at it and get better results.
Advertisement
‘Exposure to cold helps to combat the microtrauma in muscle fibers and resultant soreness caused by intense or repetitive exercise. The ice bath is thought to constrict blood vessels, flush waste products and reduce swelling and tissue breakdown.’

Commenting on this new research, Dr Jonathan Peake said: "As cold water immersion may not be the most effective strategy, athletes across various sports will need to re-think their strategies to minimize inflammation in the muscle."


Nine active young men, between the ages of 19 and 24, who were doing resistance training 2-3 times a week, participated in the study. They completed resistance exercises on two occasions, at least one week apart.

Exercise is a need to eat better and perform better. Nourishing the body with wholesome food will make it grow stronger and fitter. Here's a complete guide to pre and post-exercise nutrition.
Advertisement
After the first trial, they sat in cold water (10 degree C) up to their waist for 10 minutes. After the other trial, they performed 'active recovery' in the form of a low-intensity warm down on a stationary bicycle. The researchers took muscle biopsies before, 2 h, 24 h and 48 h after each trial.

They examined the muscle tissue for changes in the expression of genes and proteins that indicate inflammation, comparing data between the two trials.

The rationale for comparing the cold water immersion to active recovery rather than remaining sedentary was that these two treatments are representative of what athletes typically do after exercise. The research doesn't completely rule out cold water immersion in post-exercise recovery, with Dr Peake stating:

"More work remains to be done to establish whether other combinations of water temperature or duration of immersion produce different physiological effects in skeletal muscle and other soft tissues after muscle-damaging exercise."

Every pregnant woman should be aware about the basic needs of her body during the time of pregnancy. Proactive physical therapist consult is a must for healthy pregnancy.