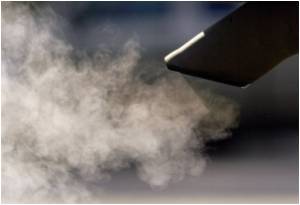 The European Respiratory Society's Environment and Health Committee are urging policymakers in Europe to introduce changes that will ensure the air that we breathe is safe and clean.

The call to action comes ahead of the upcoming review of air quality legislation in the European Union (EU) before the 2013 Year of Air. In the editorial, the ERS committee argues that any new legislation must strive to ultimately bring air pollution levels in Europe down to the already adopted World Health Organization (WHO) limits and international commitments made by EU leaders.


As guidance for public health policy, Prof. Dr. Bert Brunekreef, from Utrecht University in the Netherlands, and colleagues have devised '10 principles for clean air.' These principles include:
Advertisement
The need to significantly reduce concentrations of fine particles and ozone - the most health-threatening of all air pollutants

The current limit values for major air pollutants in Europe offer little protection from the damage that can be caused to a person's health. The limit values for particles far exceed the WHO advice and do not match the standards adopted by other countries.

Reducing the damage caused by living close to or attending schools near busy roads.

Policy makers should consider enacting further legislation with the aim to reduce or eliminate ultrafine particle and other toxic emissions from motor vehicles. Ultrafine particles and black carbon should also be considered as possible indicators for further studies and research.

The need for more awareness of high temperatures and air pollutants that act in synergy to produce more serious health effects than heat or pollution alone.

Heat waves and high summer temperatures produce higher ozone concentrations which will lead to increased burden of disease and premature deaths, particularly in the elderly or patients with chronic respiratory diseases.

An analysis carried out by the WHO estimated that current exposure to particulate matter leads to an average loss of 8.6 months of life expectancy in Europe.

Professor Brunekreef said: "The upcoming review of EU air policies is an important opportunity for policy makers to take substantial steps needed to reduce the high concentrations of dangerous air pollutants such as fine particles and ozone. We hope that the European Respiratory Society's 10 principles for clean air will guide policy makers to take the right and necessary measures to strengthen current EU limit values and safeguard public health. Many benefits would be realised including increased life expectancy, increased productivity, and improved health for all."

Source: Eurekalert
Advertisement
<< Study Warns of Stroke Risk for Diabetics
Expenses on Science Research to be Tripled in India >>

Pollution Increases the Risk to Heart Ailments
A recent study suggests that higher PM10 and NO2 (traffic associated pollutants) levels are ......