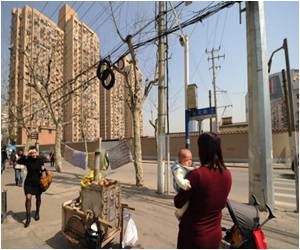 To arouse a cinematic renaissance and fend off a cultural onslaught from Hollywood, China is turning to a 1930s prostitute with a heart of gold - played by a doomed actress.

The 1934 silent movie "The Goddess" was made during a golden period for the Shanghai film industry, when its studios were the centre of Chinese-language cinematography.

In the film, a woman is driven into prostitution to educate her young son after her husband's suicide. Gossipy neighbours reveal her profession to the boy's school, forcing him to leave. She eventually murders a gambler for stealing her money, ending up in jail.


A new digital restoration of the movie was recently shown at the Shanghai Film Festival, after the state-backed China Film Archive, set up in 1958 by then Premier Zhou Enlai and the guardian of the country's cinematic history, opened up its vaults.
Advertisement
It is one of several re-masterings that come as Beijing tries to extend its soft power by exporting Chinese culture around the world, and build a stronger movie industry able to compete internationally.

"'The Goddess' deserves being seen as the pinnacle of the Chinese silent film era," said Sun Xianghui, director of the archive.

Overseas audiences saw the new print of the movie, many for the first time, a few weeks ago in Paris.

China has in the past been "very backward" on film preservation, said Linda Johnson, lecturer on Chinese film and convener for the film club of the Royal Asiatic Society (RAS) in Shanghai.

But the refurbishment drive is helped by the selection of films which match the ruling Communist Party's view of history.

Other movies chosen for the project include "Labourer's Love" from 1922, said to be among the earliest examples of Chinese film, about a fruit-seller.

A Chinese academic, who declined to be named, said: "'The Goddess' is representative of a leftist critique of society, so the Communist Party has all along held the movie in high esteem."

Lady Linda Wong Davies, founder of the KT Wong Foundation which commissioned a new musical score for "The Goddess", described the project as "China restoring its own past, its own great history".

"As China re-joins the world as a major industrial nation, they?re very keen to let the rest of the world understand who we are," she said.

"The Goddess" is virtually unknown to Western audiences, but critics say it compares favourably to foreign silent films of the same era, in large part due to lead actress Ruan Lingyu, who plays the cheongsam-clad prostitute.

Ruan acted in 29 films, only nine of which survive, before killing herself over two unfaithful lovers at the age of 24 in 1935. Tens of thousands of people lined the streets of Shanghai for her funeral procession.

"She was the most popular actress of her day," said Johnson of the RAS.

"Ruan Lingyu is marvellous in the way she can convey emotion, almost dialogue, through her body language."

But restored films have found only a niche audience in China compared to Hollywood blockbusters.

Shanghai held just two screenings of "The Goddess", though viewers paid more than $30 for tickets. "Restoring this kind of film is not very profitable from a commercial angle," said Chinese film critic Raymond Zhou.

In contrast "Transformers: Age of Extinction", had its Chinese premiere at the same film festival and went on to earn more than $300 million, becoming the biggest grossing movie ever in the country and prompting soul-searching among cultural officials.

The Chinese government said in June it will invest $16 million annually to fund five to 10 "influential" films, and offer the domestic industry some tax breaks.

"It must be recognised that we are in a full state of competition with American films," the head of China's film bureau, Zhang Hongsen, was quoted as saying by state media.

"This is about defending and fighting for cultural territory."

Earthquake Claims Over 360 Lives and Leaves Over 1,300 Injured in Southwest China
More than 360 people died and over 1,300 people were injured after southwest China was rocked by a ....

'Polo' a Rich Man's Game in China
Peng Zhichun gallops towards goal on a Chinese polo field gripping his mallet, one of a growing ......

China's Ageing Millions Look Forward to Dreary Future
He Xiangying is too busy sending her son money and raising a stranger's child to worry about who ......