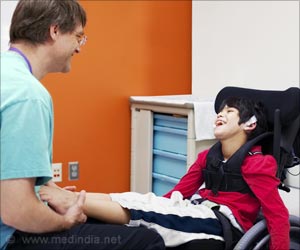 Paralympic athletes with cerebral palsy (CP) have bone mineral density and other measures of body composition similar to those of able-bodied adults of similar age, reports a study in the American Journal of Physical Medicine & Rehabilitation, the official journal of the Association of Academic Physiatrists.

While elite-level athletes with hemiplegic CP still have reduced muscle mass on the side of their body affected by neuromuscular impairment, physical training can offset other CP-related changes in body composition and physiology, suggests the study by Phoebe Runciman, of University of Cape Town, South Africa, and colleagues. "The findings provide further evidence that high levels of exercise from a young age may be beneficial to individuals with CP," the researchers write.

Kids with cerebral palsy have difficulties in their motor development early on, and often have epilepsy and learning, speech, hearing and visual impairments.
Advertisement
‘High levels of exercise from a young age may be beneficial to individuals with cerebral palsy. ’

New Evidence that Exercise Helps Physiology and Functioning in CP


Dr. Runciman and colleagues performed detailed assessments of body composition in six elite-level Paralympic athletes with hemiplegic CP. Patients with this condition have neuromuscular impairment on one side of the body (left or right), caused by brain injury at a very young age.

Researchers will report that a variant in SERPINE1, a gene involved in inflammation and blood clotting, is associated with cerebral palsy and death in very preterm babies.
Advertisement
The six study subjects, average age 23 years, were all experienced track and field athletes, training for six to 20 hours per week. They competed at an elite Paralympic level, with 100-meter sprint times between 11.5 and 12.6 seconds.

The results showed similar values for BMD and fat mass on the affected versus unaffected sides of athletes with hemiplegic CP. That was in contrast to previous studies in sedentary young people with CP, who have reduced BMD on the impaired side.

The Paralympic athletes did have reduced FFSTM on the affected side. Compared to the unaffected side, FFSTM was about 15 percent lower in both the upper and lower limbs.

Overall, BMD levels for the Paralympic athletes were similar to those of age-matched able-bodied people. In fact, BMD values were higher for the athletes with CP compared to the general population, although the differences were not statistically significant.

Adding to previous evidence, the new results suggest that in elite athletes with CP, the physiological processes affecting body composition are similar to those in able-bodied people of similar age. "These findings may highlight the importance of high levels of exercise training for all individuals with CP," Dr. Runciman and coauthors write.

In particular, the BMD findings in Paralympic athletes suggest increased density of cortical bone--the thick outer layer of bone, which responds to weight-bearing exercise. Training is also associated with normal fat mass, although the difference in FFSTM suggests a "ceiling" in how well the affected muscles can adapt to exercise.

"The combination of these findings have important implications for the involvement of children with CP in exercise as a management or rehabilitative tool," the researchers add. Studies have already shown that exercise improves functional performance and increases BMD in children with CP. The new findings in highly trained young adults with CP help in understanding how bone and other physiological systems adapt to exercise training.

"Thus there may be a significant number of children who have the capacity to participate in high-level exercise training from a young age," Dr. Runciman and colleagues conclude. However, they emphasize the need for follow-up studies to confirm the long-term benefits of weight-bearing exercise for young patients with CP.

A four-year-old paralytic Nigerian girl got a new lease of life in India after undergoing stem cell therapy, revealed her mother.
Advertisement
<< Cosmetics Not Safe During Pregnancy, may Cause Adverse Repr...
Zika Virus Test Offers Accurate Diagnosis With Simple Color ... >>

The British Council, in association with Indian Institute of Cerebral Palsy and Nandan, is organizing a film festival on disability on September 25 and 26 at the Nandan-2 theatre.