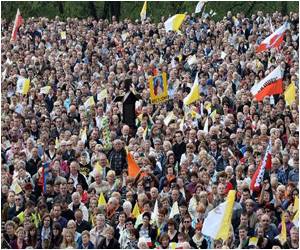 South Korea boasts of a thriving Catholic community with a social and political influence that belies its minority status in one of Christianity's most muscular Asian strongholds.

Pope Francis' upcoming visit will recognise the vicious persecution of early Korean Catholics, with the beatification by Francis of 124 martyrs executed for their faith in the 18th and 19th centuries.

Even as it celebrates its 30th birthday since being set up by the late John Paul II, the Vatican television service is busy changing its style in order to adapt to Pope Francis.
Advertisement

And the pope will also look to North Korea, where religion is subject to the tightest state control, when he offers a special mass for inter-Korean peace and reconciliation.


For many first-time visitors to Seoul, a common take-away memory is the surprising multitude of neon crosses glowing across the South Korean capital's nightscape.

Antonio Paolucci, the Vatican museum director, criticised contemporary-style churches for lacking form and harked back to the Baroque era when he said that shrines embodied religious faith.
Advertisement
The theory that prosperity and socio-economic development tend to breed secularism holds little water in a country where modernity appears to have fuelled religiosity.

Korean Christianity is particularly pro-active and evangelical, sending more missionaries abroad than any other country apart from the United States.

In the last national census to include religious affiliation, conducted in 2005, close to 30 percent of South Koreans identified themselves as Christian, compared to 23 percent who cited the once-dominant Buddhism.

The majority are Protestants, but Catholics are the fastest-growing group, with around 5.3 million adherents -- just over 10 percent of the population.

- A minority with clout -

As a minority, they punch well above their weight, with Catholics filling nearly 60, or 20 percent, of the 300 seats in the national parliament.

Of the six presidents elected in South Korea since the first free election in 1987, three were practising Christians, including the Catholic Kim Dae-Jung.

Two others, Roh Moo-Hyun and current President Park Geun-Hye, were both baptised Catholics, but non-observant.

When Catholicism was first introduced to Korea in the 18th century, it was seen as subversive and barbaric by Confucian scholars, and its followers were brutally persecuted.

That period will provide a centrepiece for Pope Francis's visit when he beatifies 124 Korean martyrs at a special open-air mass in central Seoul.

When Pope John Paul visited in 1984, he had canonised 103 martyrs -- promptly elevating South Korea to number four in the list of countries with the most canonised Catholic saints, after Italy, Spain and France.

The real growth in the Catholic Church -- and Christianity in general -- coincided with the rapid urbanisation that followed the drive to rebuild the country from the devastation of the 1950-53 Korean War.

Ripped out of their traditional social networks, the city newcomers looked for new communities and many found them in the Church.

Congregations swelled further in the wake of the Vatican II reforms which meant that mass could be said in Korean rather than Latin.

- A champion of democracy -

But perhaps the most significant growth motor was the active role the Catholic Church played in the pro-democracy struggle of the 1970s and 80s.

A number of Catholic leaders established themselves as human rights advocates, standing up to the military regime of the time under the threat of arrest and lengthy imprisonment.

"There's no doubt that this helped enhance the image of the Church and helped attract new members," said Don Baker, the director of the Centre for Korean Research at the University of British Columbia.

"It made it appear to be a Korean church, one that was concerned for Korean issues," Baker told AFP.

Seoul's Myeongdong Cathedral, where Pope Francis will conduct the reconciliation mass, was a focal point for the pro-democracy movement and was used as a place of sanctuary by many dissidents seeking to avoid arrest.

These days the focus is more on social issues, but there are progressive elements within the Church who still seek an active political role.

The Protestant church has twice the membership, but has suffered in recent years from rifts between its various denominations, and scandals involving some of its wealthiest congregations.

"There's been some disillusionment with some of the mega Protestant churches, particularly those where pastors pass control to their children," said Bae Chul-Hyun, an expert on religious issues at Seoul National University.

"Catholicism in Korea has a comparably good image, and that has pushed membership," Bae said.

By the late 1980s, the Catholic Church was held in such respect that joining began to be seen by some as a way of taking a step up the social ladder.

"I'm not sure if it would be accurate to say it is now seen as a religion primarily for the elite," said Baker.

"But you can say it is a religion in which the elite can feel comfortable."

The Vatican will be cutting the costs of sainthood applications, which could shoot up to a million dollars (735,000 euros)
Advertisement
<< Using ICDs With Long Detection Interval may Lead to Reduced...
Pacific Islands Dangerous WWII Legacy >>