Scientists at Johns Hopkins have found evidence that cancer triggers the autoimmune disease scleroderma, which causes thickening and hardening of the skin and widespread organ damage.

A report on the discovery, published in the Dec. 5 issue of Science, also suggests that a normal immune system is critical for preventing the development of common types of cancer.

According to researchers, patients with scleroderma often make immune proteins or antibodies to another protein, called RPC1. These antibodies are believed to cause the organ damage characteristic of the disease, and the reason behind this antibody production has remained unknown. The Johns Hopkins team showed that cancers from a majority of patients with severe scleroderma had a mutation in a gene called POLR3A, which codes for RPC1. These alterations created a "foreign" form of the RPC1 protein, which they say appears to trigger an immune response.


The study used blood and tumor tissue samples from 16 patients with scleroderma and different kinds of cancer.

"Our study results could change the way many physicians evaluate and eventually treat autoimmune diseases like scleroderma," says study investigator Antony Rosen, M.D. "Current treatment strategies that are focused on dampening down the immune response in scleroderma could instead be replaced by strategies aimed at finding, diagnosing and treating the underlying cancer," says Rosen, vice dean for research, director of rheumatology and the Mary Betty Stevens Professor at the Johns Hopkins University School of Medicine.

Rosen says the team''s findings should spur research into the possible cancerous origins of other autoimmune diseases, including lupus and myositis, and whether immune responses to antigens other than RPC1 are involved.

The causes of autoimmune disease are largely unproven, says Rosen. Scientists have speculated that infections, chemical exposures and inherited genes could be triggers, although hard evidence is lacking. None of those explain the onset of scleroderma, which is estimated to afflict as many as 300,000 Americans of all ages and is not an inherited disease.

Scientists have previously found that some patients with scleroderma have a higher incidence of cancer. In the most severe cases of scleroderma, patients with antibodies against RPC1 develop cancers around the time of their diagnosis more frequently than patients who have other antibodies.

Rosen''s colleague and study co-investigator Kenneth Kinzler, Ph.D., suspected that the POLR3A gene encoding RPC1 may contain mutations that trigger the development of cancer and scleroderma.

Kinzler and Bert Vogelstein, M.D., co-directors of the Ludwig Center at Johns Hopkins, scanned the POLR3A gene''s DNA code in tumor samples from eight scleroderma patients with cancer and antibodies against RPC1. Tumors from six of the eight patients had genetic alterations in the POLR3A gene. All eight patients developed cancers between five months prior to their scleroderma diagnosis and two and a half years after it. The close timing of patients'' cancer and scleroderma diagnoses suggests that the two are linked, say the scientists.

"As early cancers grow, the body is exposed to novel proteins caused by the mutations in the cancer and potentially opens a window to development of autoimmune disease," says Vogelstein, Clayton Professor of Oncology at the Johns Hopkins Kimmel Cancer Center and a Howard Hughes Medical Institute investigator.

The scientists found no POLR3A gene mutations in tumor samples from another eight scleroderma patients lacking antibodies against RPC1. These patients also developed cancers, but most long after their diagnosis with scleroderma, with half getting cancer more than 14 years after their scleroderma diagnosis.

In two scleroderma patients with the cancer-linked RPC1 antibodies, Rosen''s team found that the immune system cells in the blood of patients reacted very highly to RPC1 protein fragments from mutated POLR3A.

In other experiments, immune T cells extracted from people with scleroderma were triggered by fragments of mutated RPC1 and recognized only the mutated RPC1 protein fragments. "Altogether, this strongly suggests that the mutations led to the immune response," says Rosen.

Still, other experiments showed that long-lived, immune B cell antibodies from people with POLR3A mutations recognized RPCI whether it was mutated or not, demonstrating to researchers that once triggered, the immune response is capable of attacking both cancerous and normal tissues.

The findings revive a decades-old theory that everyone develops mutation-laden cells with the potential to morph into cancer. Through a process called immunosurveillance, the immune system detects and kills these cancer-prone cells. Full-blown cancers arise when immunosurveillance fails.

According to investigators, while evidence in supporting and refuting this theory had been gathered in mice, the new study provides the first evidence that this principle may be important in common human tumors of study participants, such as breast, colon, ovary and lung.

Study results may also help explain why, in some cases, people cured of cancer have also seen their scleroderma disappear.

Funding support for this study was provided by the National Institutes of Health, the Virginia and D. K. Ludwig Fund for Cancer Research; the Donald B. and Dorothy L. Stabler Foundation; the Scleroderma Research Foundation; and the Rheumatology Research Foundation Bridge Funding Award. Corresponding grant numbers are K23 AR061439, P30 AR053503, CA 43460, CA 57345, and CA 62924. 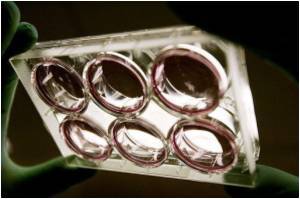 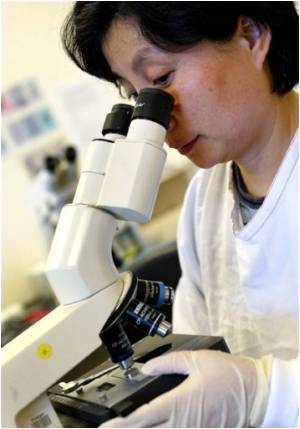