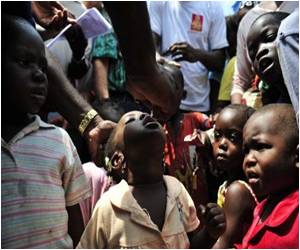 This is according to experts from Nigeria writing in this week's PLOS Medicine. Sani-Gwarzo Nasir (from the Federal Ministry of Health in Nigeria) and colleagues describe how anti-polio propaganda, misconceptions, and violence against vaccinators present huge challenges to polio eradication in Nigeria but perhaps most profound is the rejection of vaccination by Muslim clerics.

Vaccination Drive Against Polio in Syria by UN

Help was called by United Nations on Tuesday to vaccinate 765,000 young Syrian children against polio, to prevent a resurgence of the crippling disease across the restive Middle East.
Advertisement

However, according to the authors, the intense opposition to polio vaccination is systematically being reversed by the active engagement of imams to promote uptake of polio vaccination in areas worst hit by the disease. The authors describe the initiative in which selected imams have attended training sessions and the subsequent widespread community participation may have reduced the number of cases of polio in some regions of northern Nigeria.


The authors say: "This campaign demonstrates that traditional leaders in Nigeria could be relied upon to mobilize religious clerics, who in turn educated and mobilized the community. "

In the 1960s the polio vaccine in the form of injection fell out of favour, but doctors have now reported in The Lancet on Friday that it should be given a frontline role.
Advertisement
They continue: "Expanding the focus of the existing coalition campaign, which encourages parents to accept the vaccine initiative and have their children immunized, to creating awareness in the community to demand polio vaccination will have a tremendous impact on the polio eradication initiative in Nigeria."

The authors add: "The sustainability of such efforts remains the greatest challenge to eradication of polio from Nigeria."

A new research has found that re-introducing a type of polio vaccine that went out of use in the 1960s may hasten eradication of the disease
Advertisement
<< Human Milk Not Just Food for Sick and Hospitalized Babies
Use of Experimental Drug to Treat American Ebola Victims Wh... >>

Daily Calorie Requirements Pregnancy Confirmation Calculator Iron Intake Calculator Nutam (400mg) (Piracetam) Indian Medical Journals Vent Forte (Theophylline) Selfie Addiction Calculator A-Z Drug Brands in India Find a Hospital The Essence of Yoga
This site uses cookies to deliver our services. By using our site, you acknowledge that you have read and understand our Cookie Policy, Privacy Policy, and our Terms of Use