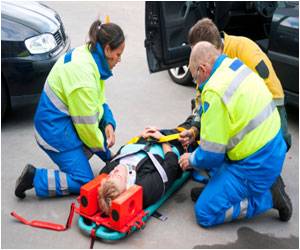 Children with bronchiolitis (common chest infection) could be exposed to repeated hospitalizations till the age 5, finds a new study. The results of this study are published in the Archives of Disease in Childhood.

These are the findings of researchers from Imperial College London, who tracked 613,377 babies (almost all births in England between April 2007 - March 2008) up to the age of five years. Around 16, 000 babies were admitted to hospital with bronchiolitis before their first birthday..

Study find correlations between genetic factors and the severest forms of acute viral bronchiolitis.
Advertisement
‘In the study, it was found that Infants who are admitted to hospital with the common infection bronchiolitis are at increased risk of further emergency admissions for asthma, wheezing and respiratory illness in the first five years of their life.’
Tweet it Now

Researchers found these children had up to a fivefold risk of emergency admissions to hospital with asthma, wheezing or respiratory illness in the first five years of their life, compared with those who were not admitted for bronchiolitis..


The researchers found that one in five children admitted to hospital with bronchiolitis as a baby will have a subsequent emergency hospital admission for asthma, wheeze, or respiratory infections..

Infants with bronchiolitis who were treated with inhaled hypertonic saline in the emergency department were less likely to require readmission.
Advertisement
Dr. Helen Skirrow, the lead author of the research from the School of Public Health at Imperial, said: "We know that hospital admissions for bronchiolitis have been rising over recent years in England. Previous studies have suggested a link between the condition and an increased risk of conditions such as asthma, but this is the largest study to suggest a severe case of bronchiolitis can result in subsequent emergency admissions for asthma and other respiratory conditions. ".

Dr. Skirrow added: "An emergency hospital admission is incredibly stressful for children and their families, and also places a burden on hospitals. If we develop interventions to prevent the initial bout of bronchiolitis - we may also be able to reduce the number of subsequent emergency admissions.".

Bronchiolitis is a common type of chest infection that affects around one in three children in their first year of life, most commonly babies between three and six months of age..

The condition causes the airways to become inflamed, triggering symptoms such as a fever, cough, and wheezing. The majority of children get better on their own - however up to one in 20 (2-5%) will require hospital treatment if they develop more severe symptoms, such as breathing difficulties..

Most cases of bronchiolitis are caused by the respiratory syncytial virus (RSV) which is responsible for around 3.2 million hospital admissions every year worldwide. Although there is no treatment for bronchiolitis, children thought to be at risk of RSV infection, such as babies born prematurely, can be given a preventative treatment called palivizumab. There are also a number of RSV vaccines currently in development..

Many factors contribute to a baby's risk of being admitted to hospital for bronchiolitis and other respiratory illnesses. These include exposure to tobacco smoke inside the home, environmental factors (such as air quality) and whether a child was breastfed..

The team say this current finding, published in the journal Archives of Disease in Childhood, highlight the importance of preventing cases of bronchiolitis..

Professor Sonia Saxena, senior author and head of Imperial's Child Health Unit, added: "Having your baby admitted to hospital with a serious chest infection like bronchiolitis is a frightening experience for parents. Our study shows these children are at high risk of subsequent hospital admission for asthma and recurrent infections across the early years of life, so we should be doing all we can to prevent this happening. Health professionals should counsel parents about benefits of breastfeeding, avoid infant's exposure to tobacco smoke and raise parent's awareness of when and how to seek help for respiratory problems as their child develops during preschool years.".

When analyzing the findings the research team took into account infants with pre-existing conditions. The scientists say more work is still needed to investigate why bronchiolitis may be linked to subsequent respiratory problems such as asthma. One theory is the initial viral infection that caused bronchiolitis may alter the immune system's response, increasing the chance of subsequent asthma and wheezing. Or it may be that a baby remains exposed to the initial triggers of bronchiolitis, such as second-hand smoke or pollution, which subsequently triggers asthma or other respiratory conditions..

The team say the research also highlights the need to develop a vaccine against RSV, which would help prevent cases of bronchiolitis.

Dr. Skirrow explained: "There are a number of trials underway at the moment developing an RSV vaccine that could either be given to newborns or pregnant women. This work provides more evidence of the importance of investing in this research, and the effect it could have on children's long-term health."

Differences in the conclusions of 2 studies on bronchiolitis have been explained in the editorial.
Advertisement

Bronchiolitis is an acute lower respiratory infection, which is common among the children under 2 years of ...