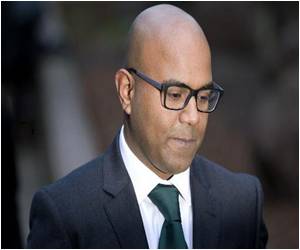 A doctor was acquitted of carrying out female genital mutilation (FGM) by London court, the first such case to be prosecuted in Britain.

Dhanuson Dharmasena, 32, said he was "extremely relieved" after a jury at Southwark Crown court found him not guilty after only 30 minutes of deliberations.
Advertisement

He was accused of performing an FGM procedure on a woman who gave birth at his hospital in 2012 following damage caused by labour.


The woman, who was 24 at the time, first underwent FGM at the age of six in Somalia.

The doctor carried out the procedure again when her stitches tore during childbirth.
Advertisement
Critics questioned why the Crown Prosecution Service (CPS) had chosen such a marginal case as its first FGM prosecution.

Defence barrister Zoe Johnson said her client had been "hung out to dry and made a scapegoat" for hospital failings.

"I have always maintained that FGM is an abhorrent practice that has no medical justification," Dharmasena said in a statement after the verdict was returned.

Another man, Hasan Mohamed, 41, who translated for the woman in hospital, was also cleared in the two-week trial of aiding and abetting Dharmasena.

Prosecutors said the doctor performed a procedure "against the policy of his employer" -- Whittington Hospital in north London -- and that it was not "medically necessary".

"My client strongly believes this case was nothing more than a show trial -- an effort by the CPS to regain some confidence after failing to bring a prosecution despite FGM laws being in place since 1985."

About 100 million to 140 million girls and women globally are thought to have undergone FGM, which ranges from removal of the clitoris to more widespread mutilation, and can lead to infection and severe long-term pain.

Government figures indicate that tens of thousands of women in the UK are living with the consequences of FGM.

Anti-FGM legislation was extended in 2003 to make it an offence for British nationals or permanent residents to carry out or seek FGM abroad, even where it is legal.

The maximum penalty is 14 years in jail.