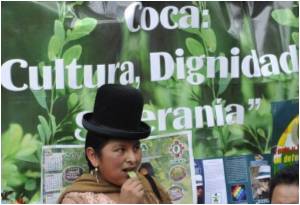 Though the world sees coca as the source plant for illegal narcotic cocaine, the coca leaf - steeped, chewed, or set alight in a ritual has been used for millennia in the Andes for medicinal and sacred purposes.

Bolivia has petitioned the United Nations Economic and Social Council to modify a provision of the 1961 UN Single Convention on Narcotic Drugs, which considers the coca leaf a narcotic and calls on countries to eradicate coca leaf chewing.

The request was filed nearly 18 months ago and will be approved unless another countries lodge an objection to the request before January 30, 2011.


Bolivia's defense of the coca leaf is so serious that Foreign Minister David Choquehuanca is currently visiting five European countries in an attempt to convince them to refrain from presenting any objections.

Drug detoxification (or drug detox) is a process that helps drug addicts to give up drugs with less or no withdrawal symptoms.
Advertisement
Washington has said it will object, but Bolivia on Tuesday got help from Spanish Foreign Minister Trinidad Jimenez, who offered to act as a mediator at the United Nations "to try to help to find an agreement," a Spanish foreign ministry spokesman said.

President Evo Morales, who also heads a regional coca growers union, is a fervent advocate of the multiple uses of the coca plant.

To emphasize his point, Morales even chewed coca leaves in 2009 at a United Nations meeting. "If it's a drug, stop me," he challenged them.

The coca leaf (Erythroxylum coca) is part of everyday life for people in the Andean region. An estimated seven million people in a region stretching from southern Colombia through Ecuador, Peru, Bolivia, northern Chile and Argentina chew coca leaves, as did their ancestors going back many generations.

Known for its stimulating and blood oxygenation properties, the little green leaf is loaded with vitamins and 14 alkaloids.

Luis Cutipa, head of the government office that industrializes coca leaves in Bolivia, says that the United Nations should acknowledge that chewing coca leaves is not a crime, and that the practice has been around for thousands of years.

Coca leaf use has been traced as far back as the Lake Titicaca-based Tiwanaku empire some 4,000 years ago.

"The coca leaf contains more vitamin A than any fruit, and two times more calcium than milk!" added Jorge Hurtado, a coca expert and a La Paz-based doctor.

However coca is also the source material of cocaine, which is obtained through a process that involves treating vast amounts of leaves with chemicals.

"Coca yes, cocaine no!" runs a government slogan, showing that Morales wants to commercialize the plant and crack down on the illegal drug trade at the same time.

Bolivia, the world's third largest producer after Colombia and Peru, devoted some 30,500 hectares (75,370 acres) to the crop in 2008 -- far beyond the 12,000 hectares the state set aside for "legal" coca use and an increase of six percent over the previous year, according to the UN Office on Drugs and Crime.

Coca is currently being used as an ingredient in Bolivian soft drinks, tea, flour, toothpaste and liquor.

On Tuesday Bolivia launched a soft drink made from the plant called "Coca Brynco," with the intention of rivaling rival its more famous US cousin Coca Cola.

The drink already has another coca-based local competitor -- Coca Colla, introduced in 2010.

The Coca-Cola Company will have little ground to complain about copyright infringement when it comes to the name, as Colla refers to the native inhabitants of the Aymara region of the country.

Drug Abuse Screening Test (DAST) is a screening test to find out if you need professional help with 'Drug Abuse' problem. This is only an anonymous self test.
Advertisement
Advertisement
This site uses cookies to deliver our services.By using our site, you acknowledge that you have read and understand our Cookie Policy, Privacy Policy, and our Terms of Use  Ok, Got it. Close
×