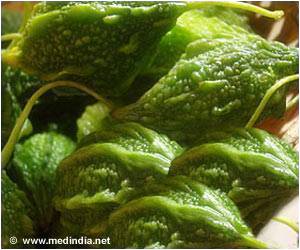 A University of Colorado cancer study published this week in the journal Carcinogenesis shows that bitter gourd juice restricts the ability of pancreatic cancer cells to metabolise glucose, thus cutting the cells' energy source and eventually killing them.

"Three years ago, researchers showed the effect of bitter gourd extract on breast cancer cells only in a petri dish. This study goes much, much farther. We used the juice -- people especially in Asian countries are already consuming it in quantity. We show that it affects the glucose metabolism pathway to restrict energy and kill pancreatic cancer cells," says Rajesh Agarwal, PhD, co-programme leader of Cancer Prevention and Control at the CU Cancer Center and professor at the Skaggs School of Pharmacy and Pharmaceutical Sciences.


Diabetes tends to presage pancreatic cancer and bitter gourd has been shown to control type-II diabetes, and has been used for centuries against diabetes in the folk medicines of China and India.
Advertisement
Following this line of thinking, Agarwal and colleagues wondered what would happen if they closed out the middle man of diabetes and directly explored the link between bitter gourd and pancreatic cancer, reports Science Daily.

The result, Agarwal says, is, "alteration in metabolic events in pancreatic cancer cells and an activation of the AMP-activated protein kinase, an enzyme that indicates low energy levels in the cells".

Perhaps not coincidentally, bitter gourd also regulates insulin secretion by pancreatic beta cells. After studies in cell cultures, the group showed that mouse models of pancreatic cancer that were fed bitter melon juice were 60 percent less likely to develop the disease than controls.

"It's a very exciting finding," Agarwal says. "Many researchers are engineering new drugs to target cancer cells' ability to supply themselves with energy, and here we have a naturally-occurring compound that may do just that."

Source: IANS
Advertisement
<< Protective Sports Equipment may Not be So Effective in Redu...
New Type of Eye Cancer Discovered in Very Young Babies >>

Bitter Gourd - Not that Bitter for Life
Bitter gourd has always been a neglected food among a large part of the population. We tend to ......

Indian Bitter Melon Extract may Harbour Breast Cancer Cure
An extract from bitter melon, a vegetable common in India and known as 'karela' in Hindi, ......

Nutritional Guard - Bottle Gourd
Oozing with health and cosmetic benefits, the bottle gourd is a blessing in disguise many are unawar...